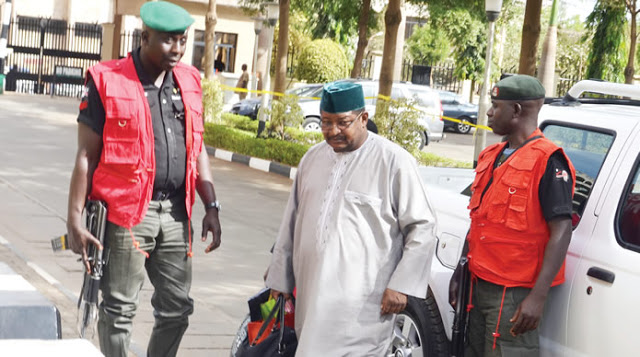 The Federal High Court in Abuja, on Monday, refused to admit as exhibit a document tendered by Economic and Financial Crimes Commission in the ongoing trial of a former Group Managing Director of the Nigerian National Petroleum Corporation, Andrew Yakubu.

Yakubu is being prosecuted by the EFCC on charges bordering on the cash sums of $9,772, 800 and £74,000 recovered from him by the operatives of the commission.

The EFCC operatives had, on a tip-off, raided Yakubu’s house located on Chikun Road, Sabon Tasha area of Kaduna South Local Government Area of Kaduna State, on February 3, 2017, when they recovered the funds kept in a safe.

EFCC’s prosecution counsel, Mohammed Abubakar, had, on November 5, 2020, tendered a document which Yakubu had filed at the Supreme Court to seek an order of stay of execution of a Kano court’s order earlier issued for the forfeiture of the money recovered from him.

Abubakar brought up the court document to contradict Yakubu, who in the course of testifying for himself as the first defence witness, claimed that he only got to know from the EFCC that the recovered money was being kept at the Central Bank of Nigeria in Kano.

But the prosecution counsel claimed that contrary to Yakubu’s claim under cross-examination, he had deposed to an affidavit filed in support of his suit filed at the apex court asserting that the money was being kept by the EFCC at the CBN in Kano.

Yakubu’s lawyer, Ahmed Raji (SAN), urged the court not to admit the document as an exhibit on the grounds that it was not the certified true copy.

Ruling, Justice Mohammed held that although it was not in doubt that the document emanated from the Supreme Court, to tender it as an exhibit required it to be certified.

The judge who relied on Section 35 of the Evidence Act 2011, said for such document to be admitted as secondary evidence it must have been certified.

“It is hereby rejected and shall be marked: tendered and rejected accordingly,” he ruled.

Justice Mohammed adjourned the matter till January 14 for the hearing of the EFCC’s application seeking an order to visit the “locus in quo”, the CBN in Kano, where the recovered money was said to have been kept.