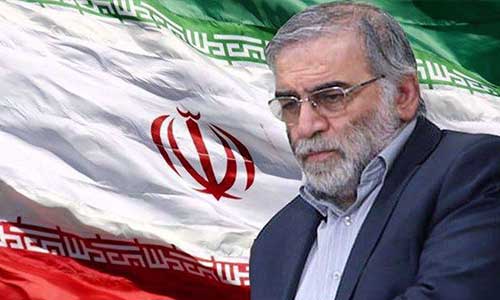 Mohsen Fakhrizadeh was injured after gunmen fired at his car and he died later in hospital, Iranian state media reported.

There are “serious indications” that Israel was involved in the killing of a senior Iranian nuclear scientist, Iran’s foreign minister has said.

Mohsen Fakhrizadeh was injured after gunmen fired at his car and he died later in hospital, Iranian state media reported.

“Unfortunately, the medical team did not succeed in reviving him, and a few minutes ago, this manager and scientist achieved the high status of martyrdom after years of effort and struggle,” a statement by Iran’s armed forces said.

Israel has long alleged that Mr Fakhrizadeh had led a military nuclear programme in the early 2000s, but the country declined to comment following the news on Friday.

The attack happened in Absard, a small city just east of the capital Tehran, according to the semi-official Fars news agency, which is believed to be close to the Revolutionary Guard.

State television said a truck with explosives hidden under a pile of wood blew up near a car that was carrying Mr Fakhrizadeh.

As the car stopped, at least five gunmen emerged and shot at the vehicle, the semi-official Tasnim news agency said.

Pictures and videos circulating online showed a Nissan saloon car with bullet holes through the windshield and blood stains on the road.

Those injured in the attack, including the nuclear scientist’s bodyguards, were later taken to a local hospital, the agency said.

While no group has immediately claimed responsibility of the attack, Iranian media has noted the interest that Israeli prime minister Benjamin Netanyahu had previously shown in the nuclear scientist.

Mr Netanyahu called him out in a news conference in 2018, saying, “Remember that name”, in reference to Mr Fakhrizadeh.

It published a photo of security forces blocking off the road where the attack took place on its website.

Hossein Salami, chief commander of the paramilitary guard, appeared to acknowledge the attack on Mr Fakhrizadeh.

“Assassinating nuclear scientists is the most violent confrontation to prevent us from reaching modern science,” he tweeted.

Meanwhile, Hossein Dehghan, an adviser to Iran’s supreme leader and a presidential candidate in Iran’s 2021 election, issued a warning on Twitter.

“In the last days of their gambling ally’s political life, the Zionists seek to intensify and increase pressure on Iran to wage a full-blown war,” Mr Dehghan wrote, appearing to refer to President Donald Trump.

He added: “We will descend like lightning on the killers of this oppressed martyr and we will make them regret their actions!”

Mr Fakhrizadeh led Iran’s Amad programme that Israel and the West alleged was a military operation looking at the feasibility of building a nuclear weapon.

He is also the only Iranian scientist named in the International Atomic Energy Agency’s 2015 “final assessment” of open questions about Iran’s nuclear programme and whether it was aimed at developing a nuclear bomb.

Tehran has long insisted its nuclear programme is peaceful.

The IAEA claims the Amad programme was halted in 2003 and its inspectors now monitor Iranian nuclear sites as part of the country’s now-unravelling nuclear deal with world powers.