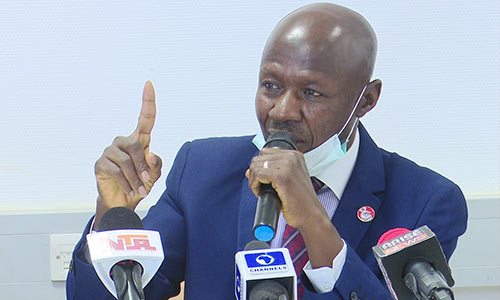 The suspended Acting Chairman of the Economic and Financial Crimes Commission (EFCC), Mr. Ibrahim Magu, has disclosed that he did not divert any recovered assets during his tenure.

Magu stated this in his defence before the Justice Ayo Salami – led Judicial Commission of Enquiry probing his stewardship of the anti-graft agency.

The Salami-led panel submitted its report to President Muhammadu Buhari last Friday and made some recommendations for the President’s necessary action.

In the defence, which was sighted by THISDAY, Magu denied diverting any recovered asset nor converting them to personal use as alleged.

“Not a dime of the recovered funds was converted to my personal use. I challenge my accuser to produce evidence of such fraudulent conversion

“While I cannot confirm the source of the figures quoted in paragraph 5(ii) where the commission was alleged to have under-reported the sum of N39,357,608,119.43, I am aware that by a letter dated March 24, 2017, Mr. President instructed me to forward the status of various recoveries the commission made from May, 2015 till the date of the letter,” he said.

He explained before the panel how recovered assets were managed in line with the EFCC (Establishment) Act, 2004.

He said the recovery modality in EFCC may seem complex to outsiders because of its complexity but to the managers within the system, it was not difficult to understand.

“EFCC makes recovery to all victims of financial crimes

“These victims include the state governments and local governments. They also include private individuals both citizens and foreign nationalities who might have suffered some loses to fraudsters.

“The federal government’s institutions that the EFCC assisted in the recovery of assets include the NNPC and its organs, the FIRS, the RMFAC, NPA, NIMASA and many other revenue generating agencies.

He further stated that the report of the 2017 PCARA to the president did not take into account these recoveries. However, they all benefited from government appointments thereafter.

“To buttress the above, it is noted that the basis for the Salami panel’s petitions and basis for probe was the under-reporting of some billions of naira in the recovery account.