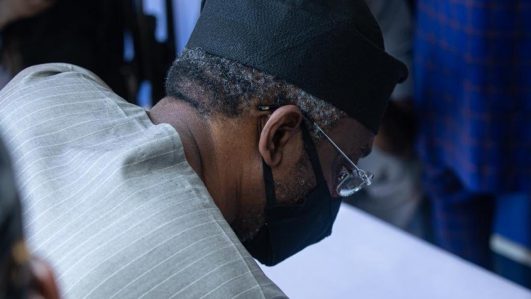 The Nigeria Judicial Council has turned down Gombe State Chief Judge’s nominee list over the omission of the most senior judge, Justice Beatrice L. Iliya.

Iliya’s name was omitted from the nomination list by the Gombe State Commissioner for Justice and Attorney-General, Zubairu Mohammed Umar.

Iliya had petitioned the NJC to reject the list and order a fresh process of nomination.

Granting the request of Iliya, the NJC rejected the nomination list when it sat on Thursday to review the situation and also and ordered the state’s Attorney-General to begin a fresh process that will be fair and transparent.

Recall that the Attorney-General refused to nominate Iliya for the position because she was a Christian like the immediate-past Chief Justice in Gombe.

In a petition to the National Judicial Council obtained by SaharaReporters, Iliya questioned the rationale behind the removal of her name despite being the most senior judge and having served as an Acting Chief Judge in the state.

She highlighted the faulty process, procedure and criteria used by the Judicial Service Commission in the assessment and selection of the shortlisted candidates.

She explained that the head of the Judicial Service Commission nominated himself and another junior colleague while excluding her name from the nominees list without any reason.