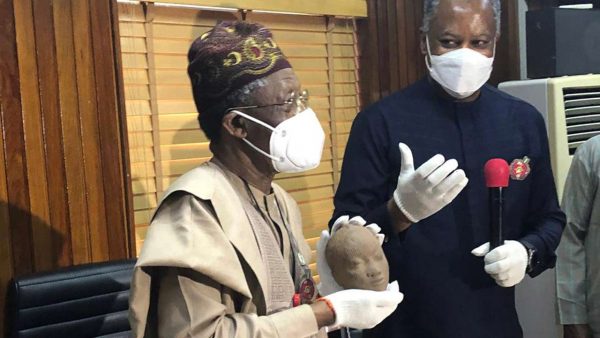 The Kingdom of Netherlands on Thursday officially presented a smuggled Ife Terracotta antiquity dated to be at least 600 years old to Nigeria.

The repatriated antiquity was presented to the Minister of Information and Culture, Alhaji Lai Mohammed at a ceremony held in Abuja.

Receiving the repatriated object, the minister said it was smuggled through the airport in Ghana before getting to Europe in 2019.

“The smuggler had obtained forged documents purported to be from a former Director-General of the National Commission for Museums and Monuments.

“The smuggler ultimately passed through the airport in Ghana before getting to Europe in 2019.

“The Dutch Customs at Schiphol Airport suspected that the object might be illicitly imported and alerted the antiquity protection office known as the Inspectie, which is the Information and Heritage Inspectorate of the Netherlands, to give an opinion.

“The Inspectie invited Nigeria to prove her case against the suspected smuggler,’’ he said.

In proving the case, Mohammed said the NCMM acted swiftly by dispatching its lawyer, Mr Babatunde Adebiyi, to present evidence and argue for the return of the object.

He said Nigeria was successful in the case and the claim was determined in its favour.

Mohammed said after all internal procedures, including the right of appeal, were exhausted, the Government of the Netherlands handed over the object to the Nigerian Embassy in Hague on Nov. 2.

He noted that with the repatriation of the “priceless and timeless’’ artefact the federal government efforts at pursuing the return of Nigerian antiquities had started yielding fruits.

The minister underscored the need for Nigeria to tap into tourism and other fields, where Nigeria has comparative advantages, in order to generate income for the nation and secure jobs for the youth.

“One way of generating income for the country is if our cultural properties are exhibited around the world to a fee-paying audience, on the basis of proper agreement that acknowledges us as owners and confers the right benefits on us.

“But this is not possible for as long as most of them adorn the museums and private collections of others, who describe them as their properties,’’ he said.

The minister reiterated Nigeria commitment to joint international efforts to put a stop to illicit export and import of cultural goods.

He said Netherland and Nigeria will make a joint presentation on the repatriation to the UNESCO Secretariat in Paris, so that other nations might take a cue from it in finding rapprochement and common ground concerning the issue of return of antiquities.

On his part, Onyema said it is a happy day for Nigeria because there are many Nigerian cultural assets around the world which have become difficult to track.

He said some of the assets were taken out of the country for over 100 years back and some more recently.

The minister said there is underground illegal market for cultural asset which has made them difficult to identify, retrieve and repatriate.

Musa said the repatriation was made possible in compliance with the 1970 UNESCO Convention on the Prevention of Illegal Trafficking of Cultural Heritage which Nigeria and Netherlands are signatories.

He said that the return of the smuggled artefact was significant considering the fact that it coincided with 50 years-celebration of the UNESCO Convention.