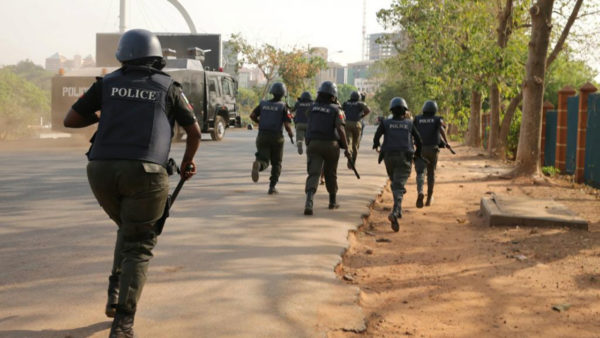 Barely some weeks after youths across the country took to the streets to protest against police brutality, another bizarre show of brutality has triggered unrest in Yenagoa metropolis, capital of Bayelsa State, when some policemen opened fire at a crowded market, leaving four women critically injured on Tuesday evening.

Eyewitnesses said the policemen in a white Hilux SUV with registration number: Terropol, NFF 8643C, opened fire on the market women, inflicting life-threatening injuries on a 17-year-old trader and three others for allegedly causing traffic that delayed their van from passing through the popular Tombia market.

The Tombia roundabout is home to a bustling market and motor park. An eyewitness told newsmen that the policemen, numbering six, started shooting into the air for traders and pedestrians to leave the roadside and make way for their vehicle to pass.

He said when the traders hesitated to leave, one of the policemen opened fire on the traders, causing pandemonium.

Miss Joy Robert, who was with her foster mother when the incident happened, said: “While we were walking down the Tombia bridge, I saw a policeman shouting at market women to clear the road for their vehicle to pass.

“Before we knew what was happening, the policeman started pointing his gun at the women, ordering them to move out of the way. The women were still dazed by the cop’s action and while they hesitated to move, he began shooting on the ground.

“I thought I had been shot but I heard my mom screaming that she could not move her legs. It was at that point I realized that she had been shot on her leg. Some persons came to our rescue after the police van had left the scene, driving towards Amossoma but I was able to write the number of the van down.

“If they line up the policemen I can recognise them. All I want is justice for my foster mother. As we speak, the hospital is already saying that if we don’t pay an advance fee, they would discharge her from the hospital.”

A pastor with one of the branches of Christ’s Embassy in Yenagoa, Mr. Onoja Majadu, whose wife was a victim, said he is traumatised by the incident.

“I was somewhere to congratulate a friend whose wife gave birth to a baby girl when I called my wife to go to Tombia market to get some food items to prepare food for the woman who was just delivered of the baby. Not quite some minutes later, I got a call that my wife was shot by the police.

“At that point, my temperature increased but I managed to ask where she was and was told she had been rushed to a nearby hospital. In fact, when I saw my wife, I couldn’t believe my eyes. She was badly brutalized.

“As we speak, the bone between her ankle and knee is badly damaged. The hospital is asking me to provide N100,000 before they would commence major treatment on her leg.”

Mr. Kingdom Baine, the father of the 17-year-old victim, Alice Baine, said: “I was in my house yesterday when her elder sister sent her to Tombia market to sell periwinkle. Around 7:00 p.m. we began to get worried that she had not returned home. Ii was in the course of searching for her that we were told she was shot on her two legs by the police. I wonder if my daughter can still go back to school. I want justice for her so my mind would be at rest.”

Narrating her ordeal, Mrs. Ebinipre Majadu, said: “Around 6:00 p.m. I was in the market to get some food items. I was buying lobsters when I heard gunshots. I didn’t feel anything initially but when I tried to run, I realised I couldn’t move one of my legs. It was at that point my daughter raised an alarm and bystanders came to my rescue and rushed me to the hospital.”

When contacted, the Commissioner of Police, Bayelsa Command, CP Mike Okoli, said: “We have the particulars of the vehicle as Terropol, NPF 8643C, white Hilux. Be informed that the vehicle and the policemen involved in this unprovoked attack on innocent women have been apprehended and now in custody.

“I want to assure you that they are already facing severe disciplinary measures the outcome of which you will be informed. I thank you for your cooperation and concern especially those who made the particulars of the vehicle readily available.

“The unfortunate incident occurred at the popular Tombia-Etegwe roundabout on November 24, around 7:45 p.m. when the patrol team was stuck in traffic and one of the police officers in a bid to clear the gridlock accidentally fired a shot, the bullet ricocheted and injured three women. The victims are responding to treatment at the Glory land Hospital, Yenagoa.”