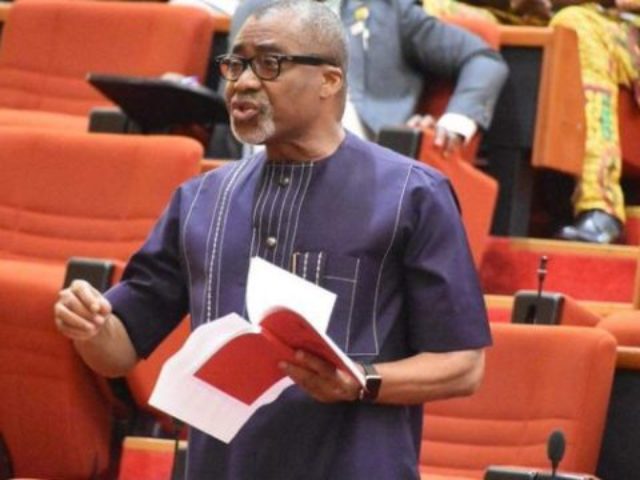 The Arewa Youth Consultative Forum (AYCF) has demanded immediate arrest and prosecution of Senator Enyinnaya Abaribe for his role in the freedom of proscribed Indigenous People of Biafra (IPOB) leader, Nnamdi Kanu.

They claimed that since Senator Ali Ndume was arrested for failing to produce former Chairman of the Presidential Pension Task Team, Abdulrasheed Maina, Abaribe must also be arrested for Kanu’s ‘disappearance’.

He had stood as surety in an alleged N2 billion money laundering suit against the ex-chairman, but after getting bail, Maina failed to appear in court for continuation of his trial.

But AYCF at a media briefing by its National President, Alhaji Yerima Shettima held that it was “unfair to arrest and remand in prison Senator Ndume, while Senator Abaribe is working freely having failed to produce leader of a proscribed group, IPOB.”

He continued: “We are not denying if Maina committed an offence or not, but we believe it amounts to setting bad example if Senator Abaribe, who stood as surety for Kanu, is still walking the streets as a free man.

“We cannot understand why Senator Abaribe, who secured bail for IPOB’s Kanu whose action has since been declared treasonable, has never ever been sanctioned.

“In the interest of equity, fairness and balance, Senator Abaribe should be immediately arrested and remanded in prison too, until Kanu is turned in or he turns himself in.

“Both Ndume and Abaribe are senators of the Federal Republic of Nigeria, and therefore, Abaribe cannot be said to be higher in status. Both are lawmakers by the grace of our national constitution and the votes of their constituents.”

IN the meantime, the Coalition of Northern Groups (CNG) has faulted Ndume’s detention.

Its spokesman, Abdul-Azeez Suleiman, while urging his release, alleged: “The evidence of bias is apparent in the order for Ndume’s detention while Senator Abaribe, former Deputy Senate President Ike Ekweremadu and others who stood bail for Kanu, who was standing trial for treason, were not ordered to forfeit the bail terms.”

SIMILARLY, a coalition of civil society groups has called for the unconditional release of the Borno lawmaker.

Speaking on behalf of the body yesterday in Abuja, Mohammed Saidu, urged security agents to go after Maina.

BESIDES, Arewa Consultative Forum (ACF) has lampooned President Muhammadu Buhari for loss of lives, destruction of properties, insurgency and banditry in parts of the country.

The leaders, who communicated their displeasure in a statement by their spokesman, Emmanuel Yawe, sought urgent action from he current administration.

Category : Uncategorized
PreviousCourt orders arrest of billionaire Maina’s son, to try him in Absentia
NextPandemonium in Senate over compensation for victims of #EndSARS protests