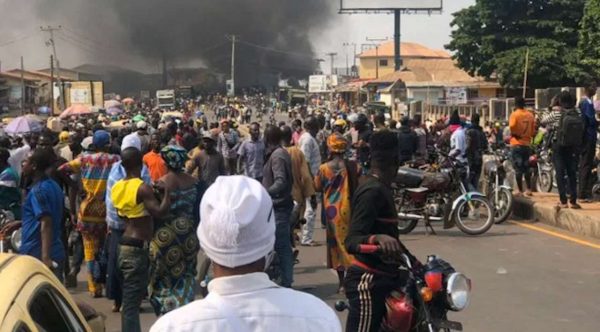 Scene of the clash yesterday

The peaceful atmosphere of Agodi Gate area of Ibadan, Oyo State capital was yesterday disrupted following a clash between some motorcyclists and officials of the Nigeria Correctional Service (NCS) at Agodi Correctional Centre.

In the ensuing melee, two persons were reportedly shot with eyewitnesses telling newsmen that one of the victims was shot in the face. An eyewitness, who identified himself as Taye Odewale, said he was not sure if the victims were motorcyclists, traders, or passerby.

Another person selling drinks in the area, who confirmed the clash, said youths made bonfires on the road to protest against the shooting.

It was learnt that the clash started when some officials of the correctional centre warned the motorcyclists plying the Iwo Road/Bashorun-Akobo road not to park opposite the prison yard. The motorcyclists allegedly defied the warning, forcing the officials to fire teargas canisters to scare them.

A source, who pleaded anonymity, said many shop owners and passersby ran for their dear lives while the clash lasted. “We had to hurriedly close our shops, some of us ran away while others closed their shop and hid inside.”

NCS Public Relations Officer, Olanrewaju Anjorin, who confirmed the clash, however, said normalcy has returned to the area. Anjorin in a telephone conversation said that men of Operation Burst, a joint security outfit set up by the Oyo State government, has been stationed at the scene of the incident.

He said: “There was a little misunderstanding between the officers and some Okada riders. They normally pack at the entrance to the prison. We usually tell them to move downward.

Also speaking on the incident, the Police Public Relations Officer (PPRO), Olugbenga Fadeyi, said: “Contrary to the trending news online that policemen fired shots leading to injury at Agodi Gate area, the truth is that there was a clash between officials of the correctional service and Okada riders.

“Upon receipt of this information, policemen as well as other security agencies moved to the scene to ensure there was no breakdown of law and order that could lead to coordinated attack on the prison facility. Policemen fired no shot,” Fadeyi stated.