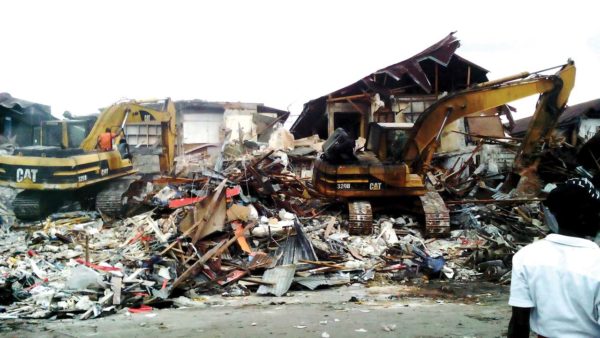 The hysteria over the recent demolition of a lone uncompleted structure that was wrongly labeled as “a hospital” at the Eke Ukwu market in Owerri is misplaced given that the structure has been there for about three years without serving any medical purpose, instead it constituted an eyesore, a hideout for miscreants and indeed an obstruction on the landscape for proper planning and development of the market.

Misinformation is at the root of the wrong perception people had about the structure. A friend from the Middle Belt sent a text to me and queried why Governor Uzodimma demolished a “hospital” structure. My response was that the structure was a white elephant project purported to be hospital. It was not. The empty building merely occupied valuable space in the centre of Owerri CBD. It was good to knock it down to make way for re-planning the space.

That is the truth. The building was a white elephant project like the 27 general hospital projects dotting parts of Imo State. These humongous projects guzzled huge scarce state resources to serve the political whims and caprices of the implementers at the time without benefitting the people. If there is anything the incumbent administration could do to remedy the situation that should be welcome.

I must acknowledge that the erstwhile Governor Rochas Okorocha, who erected that structure, must have intended to develop the space into something other than the Eke Ukwu market. He must have had his plan of which the demolished “hospital” was part.

But unfortunately, he could not accomplish the project. His exit from office rendered whatever plan he had for that space redundant. Not only that the valuable space laid fallow, which is un-economic; the so-called “hospital” building turned into a den of miscreants who turned it to public toilet. The question is what benefits do Imo people derive by leaving the structure and space in that appalling condition?

It is important that Imo people should differentiate between what the former Governor Rochas Okorocha wanted to do and what the incumbent Governor Hope Uzodimma is out to accomplish under a new plan.

Whereas, Okorocha demolished and relocated the Eke Ukwu market entirely from where it was, Governor Hope Uzodimma, on the other hand is not only restoring the market, but wants to rebuild it into a modern smart city market similar to what is seen abroad. The people should hold the Governor to his word.

All that is required is to implement a comprehensive plan that would incorporate all the facilities that would make the market functional, efficient and smart, including the rapid removal of wastes generated from the market.

If Okorocha had implemented his vision of replacing the market with a functional hospital or shopping mall, there would have been no need to demolish anything. But since the choice location at the centre of Owerri Central Business District (CBD) is left fallow for years, sanity demands that the new visible hand should do something to reclaim the place and add value to it. And that is what Governor Uzodimma is doing.

Once again, Imo people should hold Governor Uzodimma by his word. This project should not fail a second time. Governor Uzodimma has a historic opportunity to etch his name on gold by accomplishing this project and leaving a legacy as the builder of a 21st century Owerri city market.

According to the Commissioner for Commerce and Industry, Simon Ebegbulem, who spoke in Owerri, the demolition has given way for the construction of a modern market of 1,850 buildings to begin immediately to boost the economic activities of the state. A Memorandum of Understanding has reportedly been signed with Amanda Projects Group to construct a state-of-the art ultra-modern market covering over 55,343.93 square meters.

“When we got there, that place has been converted to something else to tell you that there was nothing like hospital or even a mall. It became a public toilet and it became a hide out for criminals. It became a place where all sort of evil things are planned and executed.

“As a result of that, the people of Owerri Nchi Ise, kept on lamenting due to the increase in criminal activities coming from that so called building.”

He disclosed that the state government, in an agreement with the Owerri people, decided to build a modern market for the Owerri people in order to boost the economic activities of the state. Carrying the people along is strategic in the sense that it makes the people support the project.

That manifested during the ground breaking ceremony of the project, which reports say was like a carnival featuring traditional rulers and their subjects from the zone who trooped out happily with excitement.

In implementing the market project, the plan should incorporate the total rehabilitation of Douglas Road, which is the main arterial road at the centre of Owerri CBD and Wheteral Road. The deplorable state of Douglas Road at the centre of Owerri is a huge embarrassment to Imo State. Both residents and visitors alike are appalled by the terrible state of the strategic city road.

With hordes of unruly traders hustling for every available space, the entire road is filled with all manner of ramshackle used to display assorted wares for sale. The result is the perpetual gridlock that now defines Douglas.

Efforts in the past by the state government to relocate the traders to the Relief Market, even with a promise of free stalls met with stern resistance. But the obduracy of the traders stems from the fact that there has been no counter obdurate force by government. The problem on Douglas Road became endemic because over the years, the traders were allowed to occupy the road and nothing was done to stem it, which amounts to an assault on the city.

It is noteworthy that the two city markets – Owerri Main Market and Eke Ukwu Owerri – have coalesced into one big amorphous market that has spilled unto Douglas and its adjoining streets. Consequently, Ekeonunwa, School Road and all the other access roads linking to Douglas have been taken over completely by the stubborn traders. That has given rise to endemic traffic gridlock in Owerri. It also raises the question of urban management in Owerri.

In view of the chaos in Owerri as a result of indiscriminate buying and selling by unruly traders, the new Uzodimma plan should be holistic with the aim of creating an efficient smart city. The plan should take care of the adjoining roads. The market should be developed vertically like the Tejuosho Market in Yaba with functional parking lots and law enforcement that would ensure orderliness.

The traders should cooperate with the contractors to ensure that the work is not stalled since it is in their own interest to have a functional market. The area should be sealed off while work even as action is expedited to complete the work on schedule. That was done while Tejuosho Market was under construction.