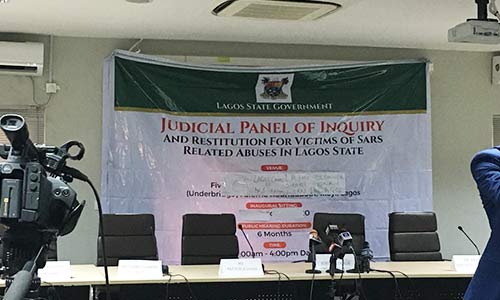 The petition which was obtained by TheNigeriaLawyer is dated and filed today, the 23rd of November, 2020, and titled “CONTEMPT OF TRIBUNAL BEING COMMITTED EX-FACIE CURIAE BY MESSRS OBianuju Catherine Udeh, Stephanie Busari, Nima Elbagir, Gianluca Mezzofiore and Katie Polglase, Barbara Arvanitidis, Muhammad Darwish and Oscar Featherstone”.

According to the Petitioner (Mr. Kenechukwu Okeke), the alleged contemnors had by their actions brought disgrace to the Tribunal’s moral and Judicial authority by publishing several articles via various social media platforms on issues of the alleged killings that took place on October 20, 2020, at the Lekki Toll Gate in Lagos; an issue which the Tribunal is currently investigating.

According to the petition, the said publications are calculated with a view to prejudicing the outcome of the Tribunal’s investigation. He therefore asked the tribunal to sanction all the contemnors in line with its power as provided under sections 11(3) and 12 (1)(c) of the Tribunal of Inquiry law of Lagos State, in other to preserve its good image and for the sake of Justice.

Furthermore, Mr. Kenechukwu Okeke called to question the supposed impartiality of one of the members of the Tribunal in the person of Ms. Olorunrinu Oduala. According to him, her actions suggest a form of bias in favour of one category of the parties currently before the tribunal.

He further accused her of retweeting matters that are related to the ENDSARS protest, in such a way that it would seem that the tribunal is bias in favour of the protesters, this he supported with what he described as her “deliberate collaboration” with Stephanie Busari (one of the contemnors), as evident on 17th and 18th of November, 2020. An exhibit which he tendered to the tribunal.

In a related statement, Mr Kenechukwu Okeke noted that foreign media houses must comply with regulations that operates within Nigeria.

“Without mincing words, @CNN or any other foreign media organisation must respect the laws of the Federation of Nigeria (including any regulations thereof), and also treat the population with respect, courtesy, and acting with impartiality, integrity and respect for diversity.” He said.

Recall that on the 19th of November, 2020, the Cable News Network (CNN) had released damning reports and its investigation on the alleged killings that took place at the lekk toll gate in the heat of the ENDSARS protest, find link to the said report here: https://edition.cnn.com/2020/11/18/africa/lagos-nigeria-lekki-toll-gate-feature-intl/index.html

Recall also that, Mr. Lai Mohammed had threatened to sanction the Cable News Network (CNN) over its investigative reports on the ENDSARS protest and alleged Lekki killings of 20th October, 2020. See link to the threat here: https://edition.cnn.com/2020/11/19/africa/nigeria-shooting-lekki-toll-gate-investigation-response-intl/index.html?utm_content=2020-11-19T16%3A46%3A05&utm_source=fbCNN&utm_term=link&utm_medium=social

At the time of filing this report, neither CNN nor any of the alleged contemnors have officially reacted to the petition.