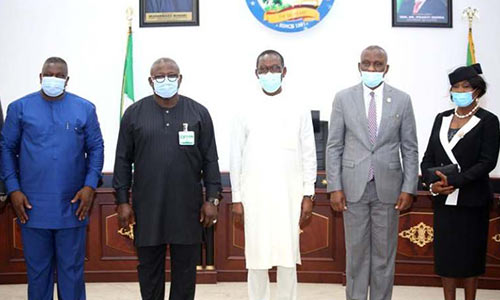 Delta State Governor Dr. Ifeanyi Okowa, on Monday, reaffirmed that his administration would continue to strengthen the processes and structures that would enhance standards in customary law processes in the state.

Okowa gave the assurance while swearing-in Justice Patience Elumeze as Acting President of the Customary Court of Appeal in the state in Asaba.

He said that his administration would also continue to promote the growth and development of native laws and customs in the state, adding that the government would leave no stone unturned to improve the welfare and working conditions of the bench and staff in the customary court system.

He affirmed that by virtue of Section 6 of the 1999 Constitution (as amended) from which the Nigerian judiciary derived its powers to administer justice, district, and area customary courts were better suited to deliver justice at the grassroots without being bogged down by the technicalities of the common law.

The governor disclosed that district and area customary courts were well-positioned to deal with matters involving land disputes, marriage, succession, inheritance, guardianship, and custody of children in rural communities, pointing out that their role in the justice system was strategic.

According to him, it is imperative that those charged with the responsibility of running the customary court system are men and women of good character and standing in the society and will ensure that justice is not only served but it is also seen to be served.

“By so doing, the courts will retain the confidence and goodwill of the public from which it derives its ultimate authority,’’ he said.

The governor, who congratulated Justice Elumeze on her appointment, said that her selection was well-deserved as it was on merit.

He described her as “cerebral, disciplined, hardworking, dependable and properly placed’’ by her current position to function as Acting President of the Customary Court of Appeal in the state.

“I expect you to continue in the same trajectory of hard work, excellence, and ethical conduct that earned you this promotion. This is not the time for you to rest on your oars but to double up your efforts.

“Let me reiterate the point that this office will further stretch your resourcefulness, challenge your intellect, task your patience, encroach on your time, and test your value system. You must maintain a high level of focus, diligence, and personal probity,” he said.

“As one who was part of the success story of the past 21 years, I am fully persuaded that Justice Elumeze is well primed to broaden and deepen the wonderful legacies of her predecessor.

“It is important that the new leadership continues to promote, preserve, and protect the principles of natural justice, fair hearing, equity, and good conscience, which are the foundations upon which the customary court system is founded,’’ he added

Okowa expressed the appreciation of the government and people of the state to the immediate past President of the Customary Court of Appeal in the state, Justice Stella Ogene, pointing out that Ogene was one of the best brains the state had produced in the legal profession.

In her speech, Justice Elumeze said that she was tremendously humbled by her appointment, and thanked the governor for finding her worthy of the appointment.

Elumeze also thanked the Chief Judge of the state, Justice Marshall Umukoro, for the part he played in her appointment and for his continued support to judges in the progress of the judiciary.

She paid glowing tribute to her predecessor, Justice Ogene for her inspiring role in the dispensation of justice in the state.

While equally thanking her fellow judges for their faith in her, she promised to serve to the best of her ability by upholding the rule of law and justice and promoting the customary law of the people which governs them from birth to death.