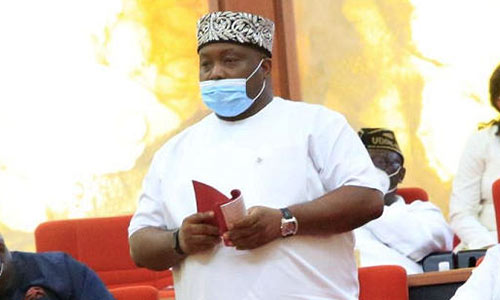 The N25 billion refunded to the Anambra State Government by the Federal Government for repayment of rehabilitation and reconstruction of Federal roads has pitched Senator Ifeanyi Ubah (Anambra South) against Governor Willie Obiano.

Ubah at a press briefing on Sunday gave Obiano 72- hour ultimatum to address Anambra on why he had to discount the promissory notes with about N8billion or two-third of the money ahead of their maturity dates.

He threatened to institute a legal action against the Anambra State Government if Governor Obiano fails to heed his request.

The promissory notes were issued to the Anambra State Government by the Debt Management Office in 2018 and 2019.

The refund was made to the state through two separate promissory notes issued by the Debt Management Office (DMO) in December 2018 and April, 2019, to the tune of N10.097 billion and N15.146 billion respectively

Commissioner for Information and Public Enlightenment, Mr. C-Don Adinuba, had in a statement denied that the State Government raised money from “the Debt Management Office or the Federal Ministry of Finance under a bond, or any financial instrument from any institution or organisation.

“Our record of prudent financial management and integrity is well acknowledged far and near. It is tough to speculate how the senator came about the phantom N25billion bond which Anambra State purportedly raised surreptitiously from the DMO/Federal Ministry of Finance.”

However, Senator Ubah, who was armed with documents concerning the transaction from the DMO and signed by its Director General, Patience Oniha and the Minister of Finance, Zainab Ahmed, insisted that the N25billion was expected to be paid in two installments.

He lamented out of the N25billion, only N16.1billion was realised by the state government after the promissory notes were discounted at the rate of 15 per cent and 13 per cent respectively, by Governor Obiano through a commercial bank.

He said the state lost whopping N8.85billion after the promissory notes were acquired at discounted rates by the bank.

“The governor paid banks over N8billion in order to cash out the promissory notes before their maturity dates, thereby ensuring that Anambra lost the amount from the transactions,” Ubah said.

The letter from the DMO to Senator Ubah with reference number DMO/PMD/598/S.4/III/881 and dated November 16, 2020, reads in part: “The Distinguished Senator may wish to be informed that these were the only promissory notes issued to Anambra State Government which fully settled the outstanding claims of the state as approved by the Federal Executive Council and the National Assembly.”

But Senator Ubah further alleged that “in order for Governor Obiano to cash out on the N25billion that hasn’t matured, he had to terminate the deal by giving up 15 per cent and 13 per cent respectively of the total sums per annum.”

The lawmaker, however, vowed to petition the Anambra State House of Assembly after which he would sue the Governor should he fail to explain to the people of Anambra State why he threw away N8billion in his rush to cash out the money before the respective maturity dates.

He, however, wondered why the governor failed to capture the money realized from the promissory notes in the state’s annual budgets.

He called on the Governor to explain what he did with the N16billion he collected after making the state to lose whooping N8billion as discounts as well as why he allegedly lied through his commissioner about the funds.

He insisted that the road projects for which the N25billion was refunded by the Federal Government were executed by the administrations of Governors Chris Ngige and Peter Obi.

Senator Ubah also alleged that Governor Obiano has prevailed on the Federal Commissioner for Works in the state to stop him from rehabilitating some bad roads in his constituency even as the governor has continued to neglect the roads.