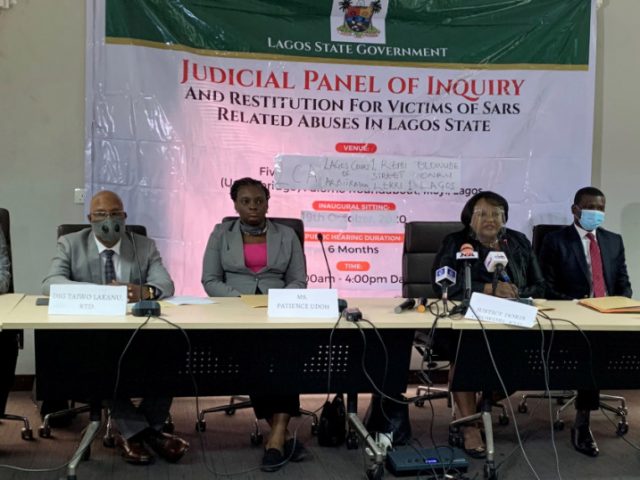 It was another round of disappointment, anger for those following the proceedings at the Lagos State Judicial Panel on Restitution for Victim of SARS Related Abuses and Other Matters yesterday, when the video footage submitted by the Lekki Concession Company (LCC) stopped abruptly at the controversial portion, where soldiers allegedly fired at the armless #EndSARS protesters.

As witnessed by The Guardian correspondent, the proceeding showed that the recording, which started at 5 pm ended at 7:59 pm on October 20, 2020.

The audience at the panel also expressed dissatisfaction that the video lacked audio and intermittently zoomed into different directions at the scene of the protest.

In the first one hour of the footage, the video showed protesters at the scene walking about. It also showed a road blockage towards the tollgate from the Victoria Island axis.

As recorded in the video, at about 6:46 pm, six security patrol vans were sighted approaching the tollgate from Victoria Island axis.

The vans caused a stir among the protesters, as some of them were seen receding from the scene of the protest. The security vans, however, stopped at a spot, with their siren lights swirling for the most part of the footage.

The video began to show night images at about 7:20 pm with protesters still at the scene.

When a counsel drew the panel’s attention to the fact that time coverage of the video had elapsed, Justice Okwuobi insisted the video should continue.

However, at about 8 pm, the video ended, to the disappointment of many who had expected to see the LCC’s CCTV video version of the shooting at the tollgate.

Counsel to some of the #EndSAR protesters, Adeshina Ogunlana, told the panel when the video ended that there was a missing portion in the footage.

Okwuobi took note of his observation and said the matter would be looked into, when the panel returned from a short break.

Shortly after recess, the panel ruled on the counsel’s argument as to who to cross-examine, whether the Nigeria Army or the Lekki Concession Company.

The representative of Nigerian Army and the LCC boss claimed to have engagement, but was delayed because of the panel.