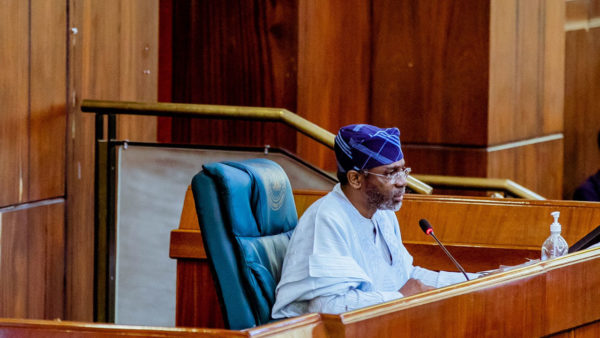 Newspaper vendors in the Federal Capital Territory (FCT), Abuja, yesterday, staged a peaceful protest in reaction to the alleged killing of one of their members by a police officer attached to the Speaker of the House of Representatives, Femi Gbajabiamila, last Thursday at the Three Arms Zone.

But the FCT Police Command has declared that the security aide who shot the deceased newspaper vendor, Ifeanyichukwu Elechi, was not a personnel of the Nigeria Police Force (NPF) Gbajabiamila has, however, offered to assist the family of the deceased, describing the incident as unfortunate.

To protest Elechi’s death, the vendors ensured that newspapers did not circulate in the nation’s capital until 10am yesterday. Members of the Abuja Newspapers Distributors Association (ANDA) strictly heeded the directive of their president, Benji Obute, and converged on the distribution centre in Area 1 for a peaceful protest to draw the attention of the Speaker and the Inspector General of Police (IGP) to the incident between 6am and 10am.

The FCT Police Command in a statement yesterday by its Public Relations Officer (PPRO), ASP Yusuf Mariam, said a preliminary investigation into the incident revealed that the security aide was not a member of the NPF.

Mariam added that the FCT Commissioner of Police, Bala Ciroma, has ordered a discreet investigation into the incident, adding that the Command would be lucid in its investigation and ensure that the findings would be made public.

Gbajabiamila, who lamented that there was no reason for Elechi’s life to have ended the way it did, said he would stand with the family and ensure that justice would be done.

He said: “I expect, and I will see to it that the family of Mr Ifeanyi Elechi receives the full measure of justice so that their bereavement is not compounded by any actions that can cause them further pain and suffering.

“I have expressed my personal condolence to his family and have arranged to meet with them when the parents of Mr Elechi, who are already on their way, arrive in Abuja.

“Additionally, I have committed to them that I will support his wife and the immediate family he has left behind.”The Speaker further disclosed that he has handed over the killer security operative identified as Abdullahi M. Hassan to the Department of State Security (DSS) for investigation and appropriate administrative and judicial action.

Meanwhile, the Human Rights Writers Association of Nigeria (HURIWA) has urged Gbajabiamila to take responsibility for the death of the deceased.

The rights group in a statement yesterday signed by its National Coordinator, Emmanuel Onwubiko, and the National Media Affairs Director, Zainab Yusuf, also dismissed the explanation offered by the parliamentarian on the tragic incident, insisting that it was an entirely avoidable incident. It demanded that the Speaker pays the deceased’s family N100 million as compensation.

Category : Uncategorized
PreviousLow morale: Police assures of full robust security in Yuletide
NextParties in property deal, why you should get a lawyer