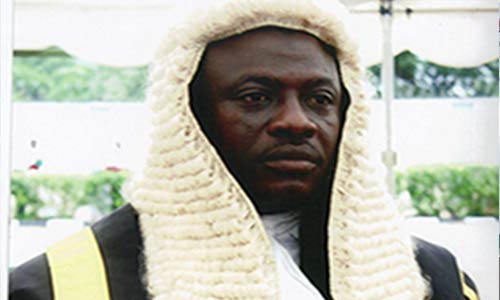 The letter signed by its National Coordinator, Onyedika Okoye, sighted by TheNigeriaLawyer, stated that Hon. Justice A. R. Mohammed granted the order even when he was on vacation and Michael Aondoakaa who purportedly represented CBN has denied being briefed by CBN to seek the order.

The Group also argued that the order is irregular and an abuse of the court process.

They, therefore, called on the NJC to investigate the matter and the same should not be treated with levity.

Read the letter below

PETITION AGAINST THE HONOURABLE JUSTICE A.R. MOHAMMED OF THE FEDERAL HIGH COURT ABUJA OVER THE FREEZING ORDER GRANTED THE CBN GOVERNOR ON THE 4TH NOVEMBER, 2020 AGAINST THE #ENDSARS PROTESTERS: A CALL FOR IMMEDIATE PROBE AND DISCIPLINARY SANCTION

The above subject refers.

On the 4th day of November, 2020, the Federal High Court Abuja, per Hon. Justice A.R. Mohammed, issued an ex-parte order freezing the accounts of some 20 Nigerians who participated in the #ENDSARS protests for 90 days. The subject of this petition is the impunity that appears on the face of the monstrous order suggesting very strongly that the hazy circumstances under which the Order was procured demands a very urgent explanation from the Judge who delivered the strange Order, the Honourable Justice A.R. Mohammed.

JUSTICE A.R. MOHAMMED WAS ON VACATION WHEN HE PURPORTEDLY ISSUED THE ORDER:

With the uproar that attended the Order of My Lord A.R. Mohammed, the Counsel on record to the Governor of the Central Bank of Nigeria, Chief Michael Kaase Aondoakaa issued a public statement denying being briefed by the CBN Governor to file ex-parte application resulting in the freezing Order of Hon. Justice A.R. Mohammed of 4th November, 2020. This denial by the Counsel who on record moved the application as appeared on the face of the Order compounds the integrity challenge of the Court’s Order.

THE ORDER IS IRREGULAR AND ABUSE OF JUDICIAL POWER:

There is no power in the Federal High Court to have made the Order that it made. Supreme Court authorities exist to the effect that ex-parte orders should be only issued sparingly and if at all they must be issued, the lifespan must be very short. Hon. Justice A.R. Mohammed was fully aware (or deemed to know) of this legal position and more particularly the decision of the Nigerian Court of Appeal bearing directly on the point in ADEDAMOLA VS GTB where it is emphatically engraved that any restriction placed on any bank account by ex-parte Order beyond 14 days is purely unconstitutional and that no Court has the power to do such. In proceeding as he did, despite his knowledge of the avalanche of existing authorities pointing in a different direction, Hon. Justice A.R. Mohammed, J. cast the age-long doctrine of judicial precedent to the dogs, polluted on the Constitution and most unfortunately set himself on a collision course with the Supreme Court. The Nigerian Supreme Court, in DALHATU VS. TURAKI, described this kind of conduct exhibited by Hon. Justice A.R. Mohammed variously as “judicial impertinence”, “judicial rascality” and the Judge himself a “judicial misfit”.

HON. JUSTICE A.R. MOHAMMED MUST BE INTERROGATED AS TO HIS JUDICIAL EXCESSES SO THAT ONE MAN MAY NOT BE ALLOWED TO DERAIL THE DEMOCRACY OF THE ENTIRE NATION:

In BAKARE V. APENA, Justice Obaseki, J.S.C. taught us that “a trial Judge ought to know that he is on trial for any improper conduct during the trial of a case before him and immediately thereafter.”

“A Judge by the nature of his position and professional calling, is expected to be straightforward, upright, diligent, consistent and open in whatever he does in court and in any other place of human interaction and human endeavor that he happens to find himself. This is because his character as a Judge is public property. He is the cynosure of the entire adjudication in the court, and like Caesar’s wife of Ancient Rome, he is expected to live above board and above suspicion, and he must live above board and above suspicion, if the judicial process should not experience any reverse or suffer any detriment. A Judge should know that by the nature of his judicial functions, he is persistently and consistently on trial for any improper conduct immediately before, during and immediately after the trial of a case.

Yet again, in DANIEL VS FRN, Justice Saulawa, regretted that;

“The problem of a corrupt judicial officer is equally antithetical and rather devastating to the well cherished rule of law. Undoubtedly, the conscience of a corrupt judicial officer is warped. His judicial oath means nothing at all, thus he hardly realizes that he is a dangerous obstacle to administration of justice. Perhaps, until nemesis catches up with him, he remains a perpetual obstacle in the way of justice. Otherwise, he is impervious to appreciate, let alone uphold, justice according to the rule of law.”

The great Master of the Rolls, Lord Denning, in his classic, Family Story at page 162 issued a similar warning to the effect that:

“When a judge sits to try a case he is himself on trial before his fellow countrymen (gathered in the courtroom.) It is on his behavior that they will form their opinion of our system of justice. He must be robed in the scarlet of the Red Judge – so as to show that he represents the majesty of the law. He must be dignified – so as to earn the respect of all who appear before him”

We pray in this petition that the National Judicial Council (NJC) promptly commence an all-embracing investigation into all the allegations which this petition projects in a transparent and impartial manner. The #ENDSARS protests, the live issues it generated and the resulting needless deaths attending it are all already grave enough. Greeting citizens of this great country with such monstrous account freezing order as was done by the Hon. Justice A.R. Mohammed should not be treated with levity but with all the seriousness that it deserves.

As we express undiluted faith in the disposition of the NJC to maintain a clean judicial system for the country, we anchor our hope ultimately on the Biblical assurance that in the end, unadulterated justice will “surge like waters, and righteousness like an unfailing stream” (Amos 5: 24).