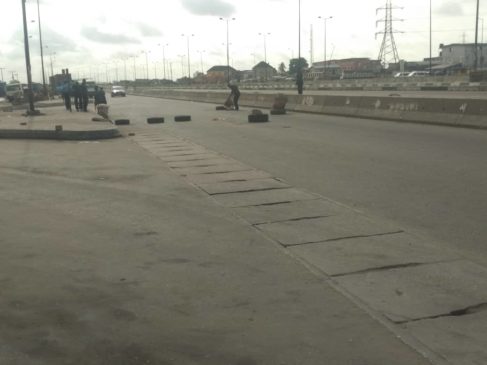 Residents of Festac Town and road users are lamenting over the pain they go through as a result of the total barricade of 2nd avenue, a major gateway to the town.

It was gathered that the barricade was ordered by the Area Commander, Area E, Festac Town, for fear of another possible attack on the station; but the action has thrown road users and vehicle owners living in the area into agony as they are now forced to use only one entry and exit point into the town.

Motorists are now forced to spend about three hours in traffic using the only available 21 Road to access the Amuwo Odofin area.

One of the residents, who spoke on condition of anonymity, said: “We are in pain as a result of the action of the Area Commander. They blocked the road and no one dared to question them. The police are really not ready to show us that they are friends of the public.”

Another road user, Emeka Isaac, said: “We hear they are barricading the road to avoid attack by EndSARS people. Are #EndSARS protesters using the vehicle during their protest? They should stop suffering the masses and open up government roads. We are tired.”

It was gathered that only persons or residents, who are very close to the Area Commander, are allowed to ply the road.

Media aide to the chairman of Amuwo Odofin Local Government Area, Kola Foloruunso, told The Guardian that the council did not approve the action of the police.

He said: “The LG Chairman did not approve the blockade of the road and he is not in support of the police action. It is wholly a police affair. He has made his position clear on this and has urged the police to open the road but they insisted on the blockade, reasons which are best known to them.”