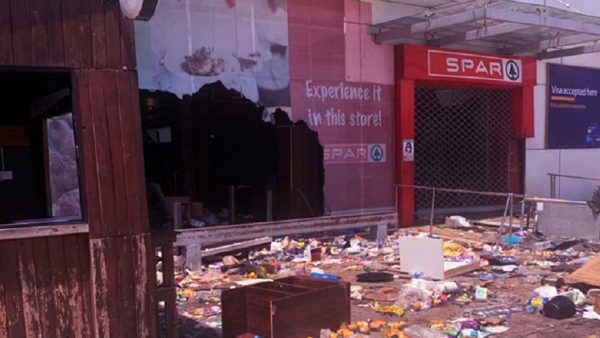 As shop owners seek succour after the wanton destruction and looting spree that followed the #EndSARS protest hijacked by hoodlums on October 20, Adeniran Ogunsanya Shopping Mall Surulere has said all affected shops in the mall will be fixed while goods looted are to be replaced by shop owners or their insurance companies.

This was made known during a visit to the mall by the Nigerian Institute of Architects (NIA), Lagos State chapter, to inspect the level of damage. The supervisor, Inyang Edem, said the mall is replacing the glasses and other structures destroyed by hoodlums but would not be responsible for replacing valuables stolen.

“Among the things stolen were Bibles, TV sets, phones, laptops, and other expensive items. We have over 100 shops here and none was left untouched in the looting spree. Even an ATM was destroyed though no money was taken from it.”

While narrating his experience, he said: “On that day here, the road was free due to the curfew. Although we have iron gates, they came with guns and machete, which they used in breaking the padlock and gain entry. They started around 7:00 p.m and ended the looting by 4:00 a.m.

“Some of us had to change our uniforms immediately they stormed the mall to pretend that we were among them. We did that to know the level of damage. What we discovered during the looting was that the looters were men and women who shop here.”

Other places visited by NIA include Olosan Mushin police station, where a 37-year-old police officer, Sgt. Abejide Abiodun was killed before the station was burnt.