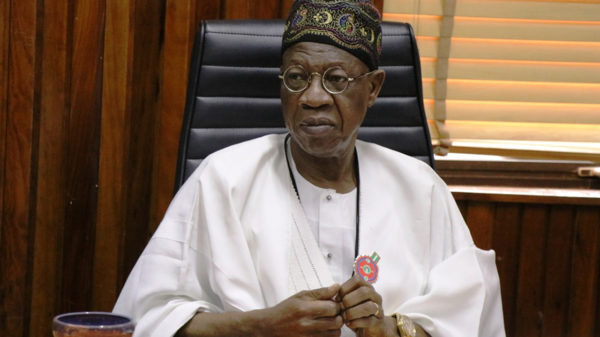 The protest had, last month, degenerated into violence after hoodlums hijacked it.

In the aftermath of the protest, various accounts emerged on what happened when Nigerian soldiers opened fire at the scene of the protest. The recent account is the feature currently on CNN, where the news station says its investigation has confirmed soldiers fired directly at protesters.

The minister also took swipes at popular Disc Jockey, Switch, whose real name is Obianunu Catherine Udeh, for claiming that many protesters were killed by troops.

While explaining the role of fake news and disinformation in the protest, Mohammed observed that what started as a peaceful protest against police brutality degenerated into violence despite an immediate response to the demands.

He accused the organisers of leveraging the social media for mass mobilisation, the spread of fake news, and disinformation that resulted in the violence witnessed across the country.

THE minister said the CNN report reinforced disinformation going around, dismissing it as blatantly irresponsible and a poor piece of journalistic work by a reputable international news organisation.

He accused CNN of engaging in incredible sensationalism and doing a great disservice to itself and journalism.

“This is very serious and CNN should be sanctioned for that. CNN merely said the videos were ‘’obtained by CNN’’, without saying wherefrom and whether or not it authenticated them.

“Were CNN reporters and cameramen at the Lekki Toll Gate that evening? If the answer is no, on what basis were they reporting? Relying on second or third-hand information and presenting it as ‘’CNN Investigation’’? Why didn’t CNN balance its story by showing the compelling testimony of Brig.-Gen Taiwo before the judicial panel in Lagos? Is this one-sided reporting what is expected from an international media organisation or any serious news organisation? If CNN had done its investigation properly, it would have known how fake news and disinformation were trending during the EndSARS crisis,” Mohammed said.

He also described the CNN report as jaundiced and accused the news medium of choosing to be blind to the fact that six soldiers and 37 policemen were killed in unprovoked attacks.

Mohammed advised DJ Switch to quit peddling falsehood and present her case, with verifiable evidence, to the judicial panel sitting in Lagos.

He debunked insinuations that the government had declared her wanted, saying she had no reason to flee or seek asylum anywhere.

MEANWHILE, the Pentecostal Fellowship of Nigeria (PFN) has condemned the Federal Government’s freezing of bank accounts of persons suspected to be linked with the protests.

PFN, while recognising the right of the Central Bank of Nigeria to monitor the movement of funds within the banking system, said they should not create the impression that they are acting in furtherance of a different agenda.

The National President of the body, Rev. Felix Omobude, urged the Federal Government to be sincere in its approach to the crisis and adopt a more conciliatory style rather than confrontation in dealing with the promoters of the protests.

The body said while PFN would not support any act of criminality, what was required in its resolution was tact and wisdom.

It said: “We caution against the use of the protest to promote ethnoreligious sentiments to polarise Nigerians. The PFN believes that with constant dialogue between the government and the people, it will be easier to regain the trust of Nigerians in finding solutions to the problems confronting the nation. The PFN is of the opinion that the time we live in calls for sobriety, reflection and restraint on the part of leadership, calling for greater caution on the part of government and respect for law and order by all Nigerians.”

PFN calls on all victims of police brutality and everyone affected by the protest to take advantage of the judicial commissions of inquiry in various states for redress.

REACTING to the minister’s comment on CNN, the Human Rights Writers Association of Nigeria (HURIWA) described it as unbridled, irrational, irresponsible, emotional, and provocative.

It said it was shameful that rather than applaud and commend CNN for its deployment of technology to ascertain what exactly took place on October 20 at Lekki Tollgate Lagos State, the minister engaged in warfare against the public.

A statement signed by the National Coordinator, Emmanuel Onwubiko, argued that a government working to promote the welfare of Nigerians people should have been happy that CNN helped us to expose what happened at the Lekki toll gate on October 20.

“The characters that carried out the attacks against the Nigerian people on October 20 at the Lekki toll gate had carried out an act of active sabotage by removing the CCTV so it was a state-sponsored attack against the people, which was meant to be concealed but luckily, CNN has used their superior scientific equipment to decode what exactly took place and instead of the government to use this great information to reach a quick determination on how to deliver social justice and then deal with those who killed peaceful protesters at Lekki toll gate in Lagos on October 20, the central government, which focuses on irrelevance and deceit, has come out to attack the truth,” the statement read.

He alleged that the verbal attack against the by Lai Mohammed was evidence that the government knew what happened to the protesters on October 20.