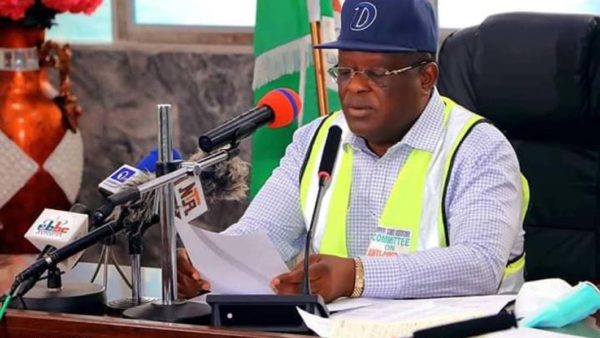 The Peoples Democratic Party (PDP) said that the strength of the party in Ebonyi and southeast was intact in spite of Gov. Dave Umahi’s defection to the ruling party.

National Chairman, Mr Uche Secondus said this in his remark at the 90th National Executive Committee (NEC) meeting of the PDP held at its national headquarters, wadata plaza, on Thursday in Abuja.

Secondus said that the PDP refused to be blackmailed on reasons given by Umahi for his defection to the All Progressives Congress (APC).

“You must have read the eventual defection of Umahi to the ruling APC on Tuesday and his provocative reason for an allegation of injustice against South East by the party.

“We have refused to join issues with him in any way but we cannot bow to any blackmail.

“What I can report to NEC is that the strength of our party in Ebonyi state and southeast is intact and the NWC has taken necessary steps to protect and guard it.

“The real season that informed this decision will soon be exposed,” the national chairman said.

Secondus, who briefed the NEC on PDP performance in Edo and Ondo governorship elections, said that the party was liaising with its members in the National Assembly to ensure that a fraud-free law was put in place ahead of 2023.

“Within our family also, we are putting all hands on deck to ensure we enter the next election stronger as one united and harmonious family.

“To achieve this, I solicit the full and undiluted cooperation of NEC.”

Secondus added that the NWC was continuing in its extensive consultations with critical stakeholders to ensure that no stone was left unturned for PDP to return to the presidency in 2023.

On EndSARS protest, Secondus advised the Federal Government to address the fundamental issues raised by the youths rather than adopting strategies to intimidate perceived leaders of the peaceful protest.

He said that peaceful protest was a right in every democracy and guaranteed by the country’s constitution.

The chairman who decried the manner in which the Federal Government was handling the affairs of the youth, said that PDP must work hard to ensure that Nigerian youths were once again, given a voice in the country.

“Our party will, as a matter of policy, restore the hope of our youths.

“We hereby invite the Nigeria youths to avail themselves of the ample opportunity in our party to participate in the political process ahead of the 2023 election,” he said.

The Chairman, PDP Governors Forum and Governor of Sokoto State, Aminu Tambulwa, said that the presence of 15 PDP governors at the meeting was a testimony that they were working together for the unity and stability of the party.

Tambulwal said that the PDP governors were committed to good governance and providing leadership in their respective states.

The Senate Minority Leader, Sen. Enyinnaya Abaribe, said that the PDP members in the National Assembly would ensure that any legislation to gag social media was not passed into law.

Abaribe said that the PDP lawmakers would also work for the amendment of the Electoral Act to ensure that electorate votes always counted.

“We also want to use this opportunity to appeal to the national party that as we work towards the 2023 elections, party discipline will be most important to us.

“Our members need to always be sure that they can depend on the national party for protection in and wherever they are,” Abaribe said.

The leaders of the party at the NEC meeting during secondus remarks displayed placards with different inscriptions such as #Stop borrowing, #Stop mortgaging our future, and #Account for borrowed Funds.

Others were #Stop the Persecution of #Endsars Youth Protesters, #Respect Nigeria Youths; #Give Nigeria Youths a Voice and #No to censoring of Social media.