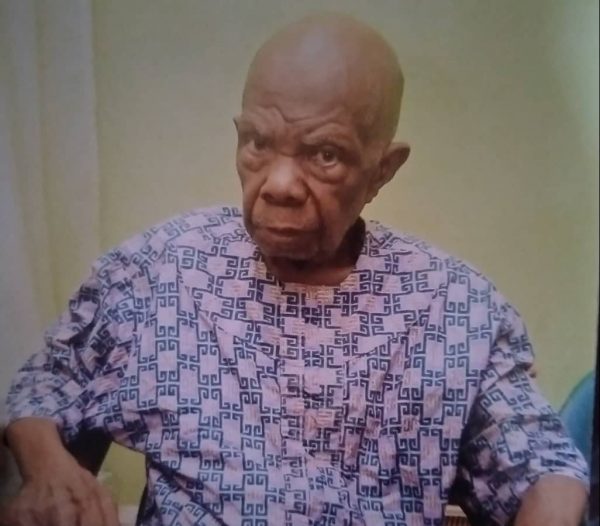 Miss Chisom Egbunuche, only daughter of “Nigeria’s oldest prisoner”, late Pa Celestine Egbunuche has cried out over the ‘abandonment’ of her father’s corpse in the mortuary, more than one year after his death.

She has called on Nigerians to help her pay mortuary charges and bury her father.

Pa Egbunuche, who hailed from Amachara Owerre Village, Akokwa in Ideato, Council, Imo state, died on October 18, 2019, a few months after he was released from Enugu prison.

Pa Egbunuche made headlines acquiring for himself “Nigeria’s oldest prisoner”, after he clocked 100 years in Enugu’s Correctional Service, where he was serving a death row on account of murder, alongside his only son, Paul.

His case was however taken up by a non-governmental organization, Global Society for Anti-corruption (GSAC), who wrote to the Imo state government, appealing that he granted pardon based on his deteriorating health and age.

The organization had argued that inmates above 65 years are eligible for either parole or state pardon, adding that the old man needed serious medical attention to enable him to continue to live.

On June 6th, 2019, he was discharged from prison, while his son, Paul was held back.

On release from prison and not having resources to take care of himself, the GSAC had taken custody of him; took him to a hospital where he was stabilized after some weeks and reunited him with his only daughter, Chisom, an apprentice in Portharcourt.

While in the custody of Chisom, Pa Egbunuche’s health grew worse and was rushed to the hospital, where he eventually died, on October 18, 2019.

Chisom told The Guardian on Tuesday that her father’s corpse had spent one year in the mortuary and still counting for want of resources to pay mortuary fees and burial.

“I can barely feed not to talk of paying mortuary fees and conveying a corpse from Portharcourt to Imo state for burial. We don’t even have a home, where he can be buried. My father’s relatives set our home ablaze and confiscated all his belongings the moment the High Court in Owerri that tried the murder charge against my father and brother, pronounced them guilty.

That was in 2001; since then, no member of our community has asked about us. We have been abandoned. Even in death, my family has been abandoned. This is a painful situation that I will wish to get over”, she cried

Although she said she was happy that “my father did not die as a prisoner”, she, however, asked for the government’s intervention for pardon for her only brother, saying, “If my brother is here, he will at least know how to go about this.

He too is suffering in prison. The crime that took them to prison was not committed by them. They did not kill anybody. Whatever they are suffering was plotted to exterminate my family because we don’t have anybody to help us”.

The ordeal of the family was said to have started following a misunderstanding among members of the family that eventually resulted in the death of one of the family members. Jolted by their circumstances of the death, relatives were said to have accused Pa Egbunuche and his son of being responsible. Although they had claimed innocence, they were dragged to court and found guilty.

Country Programmes Director of GSAC, Mrs Amaka Nweke said yesterday, that her organization had tried to call the attention of the Imo state government to the plight of the family, even before the death of Pa Egbunuche to no avail.

“When he was released in June last year, we also wrote the Imo state government to assist in his rehabilitation but nothing came. We got him out of prison and put him in the hospital for some weeks before reuniting him with her daughter.

It is sad; he had to end this way. We are perturbed that unless there is an intervention, his body may remain in the mortuary. We align with her daughter in appealing that his son is granted pardon, so that he can see to the burial of his father and also rebuild their home”, she said.