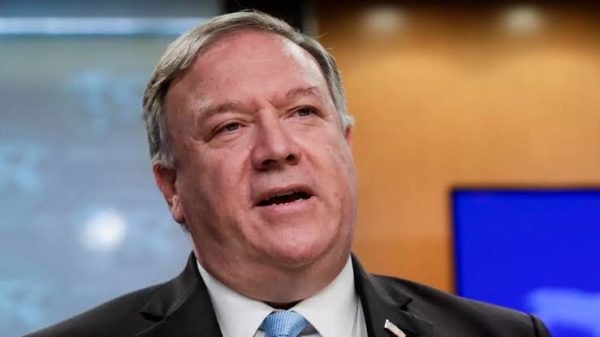 Secretary of State Mike Pompeo faces an elephant in the room as he begins a seven-nation trip to US allies — they have congratulated President-elect Joe Biden on his victory and he most certainly has not.

With President Donald Trump refusing to concede and making unsubstantiated claims of fraud, Pompeo, one of his most loyal aides, has dug in with him.

“There will be a smooth transition to a second Trump administration,” Pompeo told reporters Tuesday moments after announcing his trip, causing a stir as critics accused America’s top diplomat of breaking democratic norms to please the mercurial president.

World leaders have shown no doubt about the election, in which Biden was projected to have unseated Trump by 306 to 232 electoral votes as well as a substantial edge in the popular vote.

Leaders who have called Biden to offer congratulations include French President Emmanuel Macron, who will see Pompeo on Monday in Paris.

Pompeo, in a Fox News interview, said that such calls to Biden were not objectionable if it was “just saying ‘hi’.”

“But make no mistake about it, we have one president, one secretary of state, one national security team at a time,” he said.

A senior State Department official, asked whether Pompeo would insist to allies that Trump will remain in power, said that the former CIA director has a “broad strategy” in pursuit of US interests and that “he remains the secretary of state.”

Controversy to the end

France — which like many US allies had sharp disagreements with Trump on issues from climate change to trade to Iran — is under no illusion that the Republican tycoon will stay in power.

Macron is receiving Pompeo at the secretary of state’s request and “in full transparency with President-elect Joe Biden’s team,” a French official said, adding that contacts with Biden are “established and operational.”

Pompeo, who has mocked his Francophile Democratic predecessor John Kerry for his frequent trips for “fancy dinners” and “cocktails”, will be paying his first visit to Paris as secretary of state other than accompanying Trump to a ceremony for the centennial of World War I’s end.

After touching down in the French capital on Saturday morning, Pompeo tweeted that it was “great to be in France” and that “our partnership is built upon our shared values: democracy, freedom, and rule of law.”

“The strong relationship between our countries cannot be overestimated, and I’m looking forward to my discussions here in Paris,” he said.

The conversation is not expected to be light, however.

Foreign Minister Jean-Yves Le Drian said Friday that he would raise the concerns of France — which has been hit by a number of jihadist attacks — to Trump’s plans to speed up troop withdrawals from Afghanistan and Iraq.

Pompeo heads after Paris to Istanbul, where his trip has already caused friction.

He has no meetings booked with officials in Turkey, with the State Department official blaming scheduling issues, despite a complex relationship between the NATO allies on issues including Syria, maritime tensions with Greece and Ankara’s growing military cooperation with Russia.

Pompeo’s only announced meeting is with Bartholomew I of Constantinople — the spiritual leader of the Greek Orthodox world — to discuss religious freedom, a key topic for the evangelical Christian Pompeo.

The Turkish foreign ministry in a statement said that the United States should first “look in the mirror” and address racism, hate crimes and Islamophobia at home.

In Jerusalem, Pompeo will see Israeli Prime Minister Benjamin Netanyahu, who is a close partner of Trump but who has congratulated Biden, mindful to preserve ties with the future president who is expected to be firmer on advancing Palestinian rights.

According to Israeli newspaper Haaretz and news site Axios, Pompeo will become the first secretary of state to visit one of Israel’s settlements in the occupied Palestinian territories, which are considered illegal by virtually all other countries, and also tour the Golan Heights, whose annexation by Israel was recognized by Trump.

The reported visit was denounced by Palestinian premier Mohammed Shtayyeh, who said it would set a “dangerous precedent.”

Pompeo will also visit Saudi Arabia, on which Biden has vowed to press harder on human rights, as well as fellow Gulf allies the United Arab Emirates and Qatar.

He will in addition visit Georgia, a US ally that has also just gone through an election disputed by the losing side.