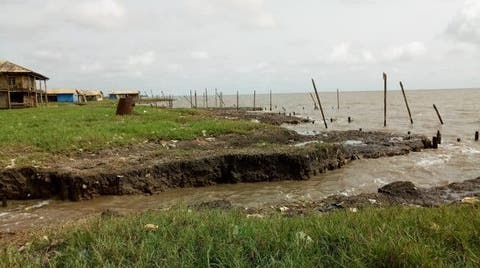 A very sad moment for the Ondo State as over 2000 residents of Ayetoro coastal community in the oil-rich Ilaje council area of Ondo State have been displaced by the surge from the Atlantic Ocean.

No fewer than 100 houses and property worth millions of naira were destroyed as a result of the ocean surge.

Reports had it that the ocean surge occurred at about 2:30 am in the early hour of Saturday when the people of the community are still in deep sleep.

The Secretary of the Ayetoro Youths Congress, Mr. Emmanuel Aralu who briefed vanguard said that “no fewer than 100 houses were affected by the surge which had rendered the people of the community homeless.

” Besides the houses that were submerged, shops and commercial centre of the community were not spare by the water from the ocean.

“The surge occurred in the middle of the night when many people had retired to bed and before we make moves to start packing, most of the houses had been submerged, we had to evacuate the people from their houses.

“Property worth millions of Naira were destroyed and washed away into the middle of the ocean. Houses were also washed away by the ocean which had almost claim the whole Ayetoro town.

Aralu, however, disclosed that no life was lost but property worth millions of Naira were destroyed, saying “the economy of our people can never be the same again”

The youth leader called on the state government to come to the aid of the people of the town before the community is wiped out.

Aralu noted that the ocean surge has claimed more than half of the community already.