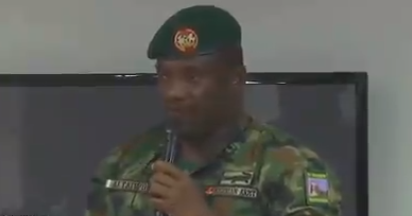 The Commander of 81 Military Intelligence Brigade, Victoria Island, Lagos, Brig. Gen. Ahmed Taiwo, has said the change in timing of the curfew imposed by the Lagos State Government on October 20, 2020, was not communicated to the Nigerian Army.

Taiwo stated this on Saturday in his testimony before the Lagos State Judicial Panel of Inquiry probing the alleged shooting of #EndSARS protesters at the Lekki tollgate on October 20, 2020.

The general also said inviting the military was the best decision the Lagos State Governor, Babajide Sanwo-Olu, could have made as the #EndSARS protest plunged the state into anarchy.

He said, “Due to the urgency of the situation, it is no wonder the governor declared a 24-hour curfew which was supposed to start by 4pm.

“Analysing that further, it shows that the situation was so dire and the governor wanted everyone off the streets.

“After some observations, this timing was shifted to 2100hrs, that is 9pm.

“However, these timings were not communicated to the Nigerian Army.

“Be that as it may, the Nigerian Army deployed immediately to forestall further break down of law and order.”

Earlier reported that the general said Saturday that the Army was unhappy that Sanwo-Olu denied inviting the soldier to the disperse the protesters.

Eyewitnesses had claimed that the soldiers arrived at the demonstration scene around 7pm, some two hours before the commencement of the curfew.

The Lagos governor has been under fire since the incident at the Lekki toll gate which has been condemned by local and international civil rights organisations.