US evacuate citizen who tested positive for coronavirus in Lagos
Editor
April 1, 2020
4:32 pm 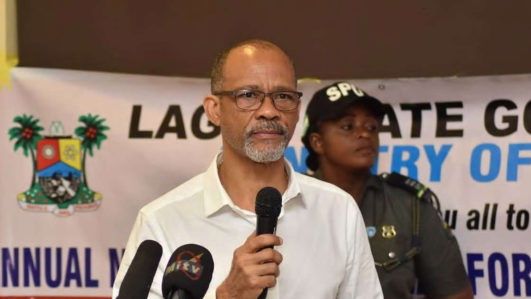 The Lagos State Commissioner for Health, Akin Abayomi, has on Wednesday announced an evacuation of an American citizen who tested positive for coronavirus to the United States.

“One of the confirmed case who is an American citizen has been evacuated to USA,” Abayomi said on Twitter on Wednesday.

The commissioner also stated that the last confirmed coronavirus case recorded in the state was on Tuesday, 31st of March.

He noted that eight patients have so far been discharged following their full recovery.

Other countries like Germany, Israel, and France evacuated their nationals following the rising cases of coronavirus disease in the country.

As at 12:30 pm on April 1, there are 151 confirmed cases of coronavirus reported in Nigeria. Nine have been discharged with two deaths.

Oyo has eight cases, Ogun and Edo have four cases each, Kaduna has three, while Edo, Enugu, Ekiti and Bauchi states have two cases each.

Rivers and Benue states have recorded one case each.

Nigeria president Muhammad Buhari on Sunday ordered a total lockdown of activities in two states and the capital city Abuja.

The lockdown which began on Monday evening in Abuja, and Lagos, which have the highest number of coronavirus cases in the country, and Ogun State which shares a boundary with Lagos State, would have their residents staying at home for the next 14days.

The president said the government would use the “containment period to identify, trace and isolate all individuals that have come into contact with confirmed cases.

Over 41, 000 have died globally while more than 830, 000 persons have so far been infected worldwide.
Category : Uncategorized
PreviousPrecedent: When The Supreme Court’s Obiter Dictum Will Be Binding On All Other Courts
NextCourts are expected to adjudicate, dispense time-bound cases during lockdown – Malami says