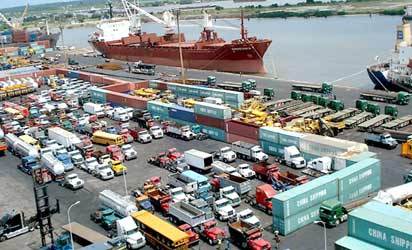 The Association of Nigerian Licensed Customs Agents (ANLCA), has called on the Federal Government to declare a force majeure on imports and exports operations in the ports with immediate effect.

ANLCA, in an open letter to the Vice President, Yemi Osinbajo, said it is fully in support of Federal Government efforts to contain the spread of the virus through partial lock-down of industrial and business activities, and argued that a force majeure will not only suppress the spread of the deadly virus but also create a buffer against unquantifiable economic loses which accumulated port charges and fees will impose on the port economy and the port business community at the end of the COVID-19 crisis.

The letter signed by the ANLCAs National President, Mr. Uju Nwabunike, stated that “whereas partial and total lockdown by various states has immediately taken adverse toll on all imports and exports, presently trapped in the various gateways to the nation; demurrages and rent payable to shipping companies, concessionaires/terminal operators is growing and would have reached a frightening and unbearable proportion by the time normalcy returns.”

Nwabunike also appealed to the government through the office of the Vice President who is the Chairman of the Presidential Enabling Business Environment Committee, PEBEC, to prevail on shipping companies, terminal operators and agencies of government in the ports to waive all charges, taxes and fees during the period of the force majeure.

The letter reads in part: “We are happy with measures already taken by  the Federal Government of Nigeria to fight the Coronavirus, COVID-19, scourge in a bid to stop the spread of the  virus in Nigeria. We at ANLCA are in full support and we have since last week shutdown our National Secretariat and advised our numerous members across the country to practice the recommended Social Distancing and Stay at Home directive by the Federal Government in its efforts to help contain the spread of the virus by moving from offices to ports and to various homes.

“There is no gain saying that before the COVID-19 pandemic subsides for normal businesses in the seaports, airports and border stations, imported and exported items might have been trapped in the various gateways to the nation. As such demurrages and rent payable to shipping companies, concessionaires/terminal operators will have attained unbearable proportion due to the lock down.

“As you already know sir, it is difficult, if not totally impossible to process customs documentation and to take delivery of cargoes in our ports during this period. Even when attempts are made, it becomes difficult because state governments have closed interstate borders, markets are locked and movement of certain vehicles restricted.

“We hereby call for the enforcement of force majeure and total lock-down of our seaports as already done in the airports and border stations to curb the spread of the deadly Corona virus and to protect the Nigerian workforce operating in our ports.

“We also appeal to the Federal government to prevail on shipping companies, terminal operators and other agencies in the ports to be prepared to waive all charges, taxes and fees during this period of national compromise at all levels. Consequently, we seek for all demurrage, rents, penalties, etc. emanating from inability to clear cargoes as at when due from the ports at this period to be waived effective from the first week of March, 2020 when the first case of the deadly virus was detected in Nigeria through an Italian citizen.”

The ANLCA leader said the appeal for suspension of charges and fees became necessary in view of the fact that most of the ports critical operators are foreigners; while further seeking government understanding for its open letter which according to him has become necessary in order to create a conflict free and friendly business operating environment, even after this national pandemic is over.
Category : Uncategorized
PreviousEkiti sit-at-home defaulters to face prosecution –Police
NextChina reports 1,300 asymptomatic virus cases after public concern