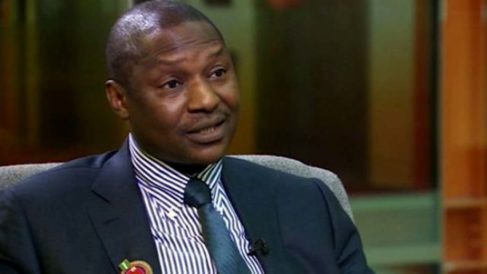 Nigeria’s ATTOORNEY-general and justice minister Abubakar Malami on Tuesday said President Muhammadu Buhari’s decision to lockdown Lagos, Ogun State and Abuja was not in breach of the country’s constitution.

Malami in response to a human rights lawyer Ebun Olu-Adegboruwa, SAN, said his criticism that Buhari lacked the constitutional power to shut down the two states and the country’s capital city was ‘wrong and misconstrued.’

“Section 305(6)(b) of the 1999 Constitution (as amended) permits a proclamation of a State of Emergency to run for a period of 10 days without the approval of the National Assembly when the parliament is not in session as in the present situation wherein the National Assembly has shut down,” Malami said.

Buhari on Sunday ordered the restriction of movements in Nigeria’s capital city Abuja and Lagos, which are the hardest hit by a coronavirus in the country.

These measures, Buhari said, are the best and most efficient way to avoid getting infected is through regular hygienic and sanitary practices as well as social distancing.

Buhari noted that business closures in the nation’s capital city, Lagos and Ogun State will cause many citizens inconveniences but urged them to see it as a sacrifice for the good of the country.

However, Adegboruwa believes that Buhari has no powers to restrict the movement of persons without recourse to the National Assembly.

“We are running a constitutional democracy and it is illegal for the President to take over the affairs of any State of the country,” Adegboruwa said.

Malami said in a statement that Adegboruwa’s stance on Buhari’s constitutional powers were incorrect in regards to a public emergency like the coronavirus.

“The learned silk also goofed when he questioned the President’s powers to restrict movement and claiming that such powers can only be exercised by the State Governors and the respective State Assemblies,” Malami said.

“It is clear from the President’s broadcast that what His Excellency sought to address is a public emergency occasioned by a dangerous and infectious coronavirus disease.”

The justice minister said Buhari acted “rightfully under the powers conferred on him by the Quarantine Act 1990 CAP 384 LFN whose Long Title read thus: “An Act to provide for and regulate the imposition of quarantine and to make other provisions for preventing the introduction into and spread in Nigeria, and the transmission from Nigeria, of dangerous infectious diseases”.

He urged all persons, entities and authorities in the country to ensure strict compliance with the restriction order as issued by the President for the good of the country.

So far, Nigeria’s confirmed cases of coronavirus on Tuesday rose to 135 in total. 11 of the patients have been discharged after recovery from the disease and two deaths recorded.