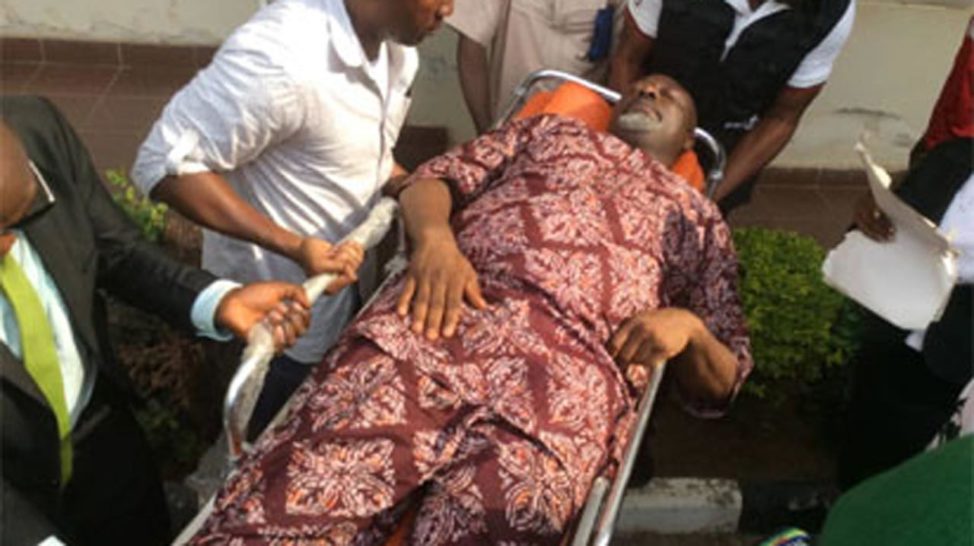 Dino Melaye on a stretcher at the Magistrate’s Court, Abuja …yesterday. Photo: Lucy Ladidi Elukpo
Nigeria’s lawmaker, Dino Melaye without a doubt has been the most controversial across social media and traditional media, for obvious reasons.

Recall that the senator representing Kogi west was alleged to have sponsored hoodlums in the state, which led to him to jump off a moving vehicle that was taking him to court.

And most recently was the announcement of his colleague in the Nigerian senate, Ben Murray-Bruce, who said Dino Melaye was kidnapped on Thursday while he was on his way to court in Kogi State.

Another story surfaced on Friday when the embattled senator, Dino Melaye, announced that he had escaped from his kidnappers. This sent Nigerian Twitter into diverse reactions.

#Dinomelaye #DINO Melaye is so full of talents.
Man can sing, dance and act.
He can even decacast if there is something like that.
Abeg find me water make i waka comot for this country,

In Nigeria, the lawmakers run from the law… Conflicting stories! Obviously looks like he planned his own abduction to avoid the court case. Smh. #DinoMelaye pic.twitter.com/IngqeHdYNM

Please I am looking for just one person, I mean it, just one who has said he believes #DinoMelaye was truly kidnapped. Nigerians can disbelieve #Melaye pic.twitter.com/RHBcviNeAq

I just wanna meet #DinoMelaye and tell him with impeccable politeness that “sir, you are a fool”. Seem he loves being tagged controversial on the internet, let’s call spade a spade. He’s a fool