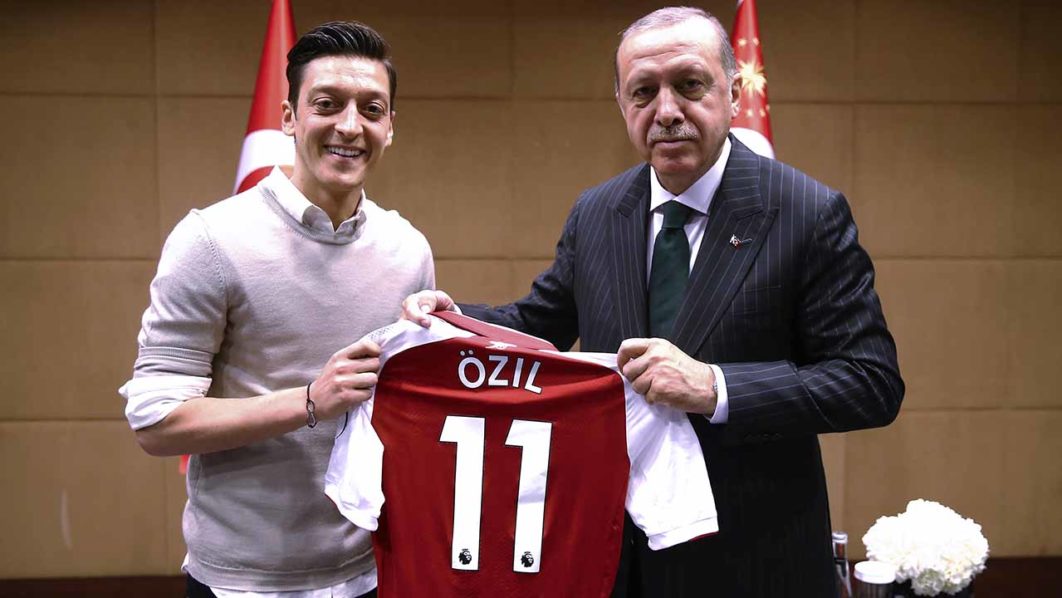 Footballer Mesut Ozil said Sunday he had no regrets about his controversial photograph with Turkish President Recep Tayyip Erdogan that sparked questions about his loyalty to Germany’s national squad ahead of the World Cup.

Breaking his silence over the snapshot that caused outrage during the tournament, the Arsenal midfielder said in a statement on Twitter that he was true to both his Turkish and German origins and insisted he did not intend to make a political statement.

“Like many people, my ancestry traces back to more than one country. Whilst I grew up in Germany, my family background has its roots firmly based in Turkey,” he said.

“I have two hearts, one German and one Turkish.”

Ozil, 29, said he had first met Erdogan in 2010 after the president and German Chancellor Angela Merkel watched a Germany-Turkey match together in Berlin.

“Since then, our paths have crossed a lot of times around the globe,” he said.

“I’m aware that the picture of us caused a huge response in the German media, and whilst some people may accuse me of lying or being deceitful, the picture we took had no political intentions.”

– ‘Not about politics’ –
Ozil said that despite the timing of the picture with teammate Ilkay Gundogan and Erdogan — shortly before the president won re-election in a poll endowing him with sweeping new powers — “it wasn’t about politics or elections, it was about me respecting the highest office of my family’s country”.

“My job is a football player and not a politician, and our meeting was not an endorsement of any policies,” Ozil said.

“I get that this may be hard to understand, as in most cultures the political leader cannot be thought of as being separate from the person. But in this case it is different. Whatever the outcome would’ve been in this previous election, or the election before that, I would have still taken the picture.”

Germany is home to more than three million people of Turkish origin.

Ozil and Gundogan, who both have Turkish roots, were booed by German fans in pre-World Cup friendlies after posing with Erdogan in May in London.

Manchester City midfielder Gundogan presented him with a signed club shirt on which he had written “to my president”.

After the tournament, Ozil came in for stinging criticism in Germany for the side’s shock first-round defeat at the World Cup.

Team boss Oliver Bierhoff suggested after the debacle that Germany should have considered dropping Ozil after his failure to explain himself over the Erdogan picture.

Bierhoff later backtracked, saying that he “was wrong” to put Ozil under undue pressure, but the picture continued to draw scorn from fans on social media.

– ‘Right-wing propaganda’ –
Ozil said he could abide criticism of his performance on the pitch but not when it was linked to his ethnic background.

“If a newspaper or pundit finds fault in a game I play in, then I can accept this,” he said.

“But what I can’t accept are German media outlets repeatedly blaming my dual-heritage and a simple picture for a bad World Cup on behalf of an entire squad,” he added, calling it “right-wing propaganda”.

“This crosses a personal line that should never be crossed, as newspapers try to turn the nation of Germany against me.”

He angrily denounced the broadside by Matthaeus, who he noted “met with another world leader a few days back and received almost no media criticism” in an apparent reference to an appearance with Russian President Vladimir Putin.

Ozil also railed against an unnamed sponsor which he said removed him from promotional videos for the World Cup after the pictures with Erdogan emerged.

“For them, it was no longer good to be seen with me and (they) called the situation ‘crisis management’,” he said.