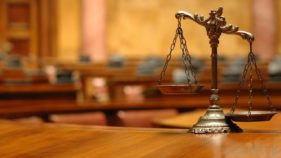 The court, although presided over by another judge, also sentenced one Sunday Abana of the Askira Uba Local Government Area of Borno State to 40 years imprisonment for participating in the attacks of the sect in 2013.

Abana, who pleaded guilty to the 10 counts preferred against him, confessed that he was trained in weapon handling by Boko Haram in “the forest.”

He also confessed that he “actively participated” in the sect’s attacks in eight named villages where many lives were lost.

Twenty-seven years old Ali, who pleaded guilty to the three counts of terrorism preferred against him on Thursday, was said to have worked as a security guard in Ikoyi, Lagos, after he escaped from a Boko Haram camp in Borno State in 2013.

He spent a period in Lagos but was arrested by the Civilian Joint Task Force in Maiduguri in 2015 after he decided to return to Borno State as peace was gradually restored in the state.

Ali, who was born and brought up in Banki town, Bama Local Government Area of Borno State, was said to have been initiated into the sect by his father, Abubakar Baluye.

The prosecution said he escaped from the Boko Haram camp after the sect members killed his father as a punishment for revealing secret information of the group.

“The defendant escaped to Lagos and stayed within Ikoyi where he was selling recharge cards and working as a security guard,” the prosecuting counsel said.

Ali confessed that while being an active member of the sect, he handled different types of rifles which he did not know their names as he participated in many attacks of the sect at Gamboru, Nagala, Baga, Dikwa, Banki and Njimtilo.

He confessed killing many people whose number he could not remember during the attacks.

During his trial on Wednesday, the prosecution accused him of killing his father, an allegation which he denied.

Ali explained that he was only ordered by the Boko Haram council in his camp to call his father whom they later found guilty of an offence punishable by death.

He said he was asked to leave after he arrived at the said council with his father who was later killed after he had departed the place.

The prosecution urged the court to pass the maximum death sentence which the Terrorism Prevention Act prescribes for such offences.

The defence however urged court to temper justice with mercy.

In his judgment, the judge noted that the defendant’s claim that he abandoned the sect after his father was killed and escaped to Lagos was believable.

The court also noted that it would be merciful to him for not wasting the time of the court by pleading guilty to the charges.

It also noted that from the evidence before the court that the convict had been exposed by his father to the teachings of Boko Haram sect from infancy, the period in which it would not have been possible for him to differentiate between right and wrong.

The judge thereby sentenced him to 15 years for professing to be a member of Boko Haram, 25 years for participating in the attacks of the sect and seven years for failing to disclose information about the sect to security authority.

All the sentences are to run concurrently.

Abana, who was sentenced to 40 years on eight out of the 10 counts preferred against him, had pleaded guilty to all the charges.

He was sentenced to 20 years for professing to be a member of Boko Haram and to 30 years for receiving training in weapon handling by Boko Haram.

All the sentences are to run concurrently.