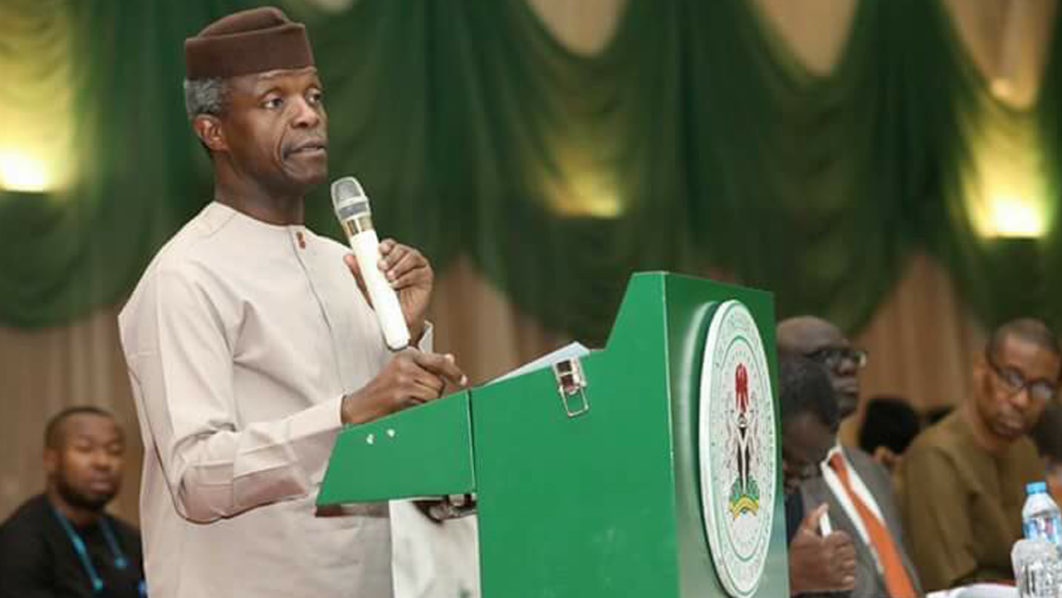 The Nigeria Vice President Yemi Osinbajo explained why Nigeria is ripe for state police. None of the 36 governors was in attendance at a security summit on Thursday.

The inability of governors, as state chief security officers, to commandeer police forces has always been on the front burner of complaints about defects in the nation’s structure.

Present, however, were the Inspector-General of Police, Ibrahim Idris, Chief of Army Staff, Lt-General Tukur Buratai, and the Chief of Naval Staff, Ibok-Ete Ekwe, among others.

“We cannot realistically police a country the size of Nigeria centrally from Abuja. State police and other community policing methods are clearly the way to go,” Osinbajo told participants at the two-day National Security Summit organised by the Senate.

Highlighting the country’s “complex” security challenges, the vice president noted: “Securing Nigeria’s over 900,000 square kilometres and its 180 million people requires far more men and material than we have at the moment. It also requires a continuous re-engineering of our security architecture and strategy. This has to be a dynamic process.

Osinbajo who declared the summit open also stressed the need to boost collaboration with Nigeria’s neighbours in the Chad Basin by strengthening security at border communities, thus preventing the movement of small arms, and facilitating the disarming of armed pastoralists and other bandits.

“We must avoid the danger,” he said, of the security challenges spiraling into religious or ethnic conflict.

On the controversial issue of allocating land to herdsmen, the vice president said: “Let me reiterate that on no account will any land be seized or forciblly taken to create ranches or grazing areas. All insinuations to that effect should be disregarded. Instead, it is in our view that states that are willing should cooperate even with willing investors for commercially viable government-supported ranches or livestock production centres for commercial use.”

The summit came at a time of nationwide concern about insecurity, amid deadly clashes between herdsmen and farmers, kidnappings, armed robbery, ethnic agitations and militancy.

“This is not a summit to trade blame; in no way is this a blame game. Neither is it convened so that any person or entity can take credit. We just want solutions. Solutions only. That is all Nigerians require of us,” declared Senate President Bukola Saraki.

According to him, “There can be no denying the horrific reality in many parts of our country today. People who should be neighbours are turning on one another and taking up arms. These attacks and reprisal attacks are an intolerable cycle of hell that must be broken. Killings, kidnappings, mayhem and general lawlessness cannot be the new normal. We must take this country back and restore order.”

Saraki was, however, cautious about what it would take to rescue the nation from the brinks of insecurity.

“We have the capacity to bring about a change in this situation, to end the violence and bring succour. We have the capacity. But do we have the political will? I dare say political will is what is required. And it is my hope that we shall marshal it as a legitimate instrument against this problem. Indeed, there is no reason why that should not be the case,” he said.

What Nigeria needs at this time “is leadership that will work, to douse the flames and reduce tension in the land,” Saraki said, adding: “It is essential that we lower the barriers in our actions and rhetoric and refrain from playing politics with a crisis situation in which Nigerian lives are being lost tragically and needlessly on a regular basis.”