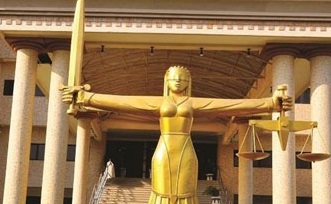 As drama continued to unfold in the Stephanie Otobo saga. As Mr. Festus Keyamo, SAN, lawyer to Stephanie Otobo, the Canada-based night club stripper and musician, has sought to withdraw as counsel in the Otobo vs Apostle Suleman’s sex case.

Recall that Otobo had alleged that Apostle Johnson Suleman, president and founder of Auchi, Edo state-based Omega Fire Ministries, was her secret lover who promised her marriage and later breached the promise.

The saga which broke in March last year saw the man of God firing back and suing Otobo and an online medium, one billion Naira each, at the Ikeja high court in Lagos, Nigeria.

But, Otobo who then had the legal services of her counsel and lawyer, Festus Keyamo, had continued to insist that indeed, an illicit affair took place between her and the fiery preacher. She had also released several videos in the process to that respect.

But, after almost a year of accusations and counter-accusations, a shocked Nigeria woke up on Saturday, January 27th, to view a widely circulated online video where Otobo had gone to Apostle Suleman’s church in Auchi during the monthly Fire Night programme (an vigil programme) on Friday night of January 26th to confess before the mammoth crowd that she was used by “some powerful politicians and men of God” to destroy the character and reputation of Apostle Suleman.

Otobo had, in the video, knelt down before the wife of Apostle Suleman, weeping profusely and pleading for forgiveness.

But since her confession and plea for forgiveness, Otobo claims her sponsors, and her lawyer, Keyamo, made frantic efforts, including email and text messages now in the custody of the fiery preachers’ team to persuade her to reverse her confession.
She said part of such desperate efforts by her sponsors was the video of July 2017 released by an online medium(Not Vanguard) where she claimed she was under pressure by Apostle Suleman to confess.

But countering the old video immediately after its release, Otobo, in her hideout in Lagos, released a new video to debunk the former as carried by the online medium.

Otobo added that the said video which was shot more than six months before her public confession at Apostle Suleman”s church was one of the tactics her sponsors used to goad her on what she described as the path of lies and falsehood.

She reiterated that her confession at Apostle Suleman”s church was true and voluntarily done to set her troubled mind free.

To strengthen her resolve to free her mind from those she said were her manipulators, she has deposed to an Affidavit of Disclaimer, stating, interalia, that the statement of defence filed at Ikeja high court, purportedly on her behalf by her lawyer was untrue.

According to Otobo, the statement and photographs exhibited in the court processes did not emanate from her.

She claimed, “I was invited to my lawyer’s chambers to sign a bundle of documents but when I asked what the bundle of documents were meant for, I was deceived and told they were to be sent to the Nigeria Police to release my cell phone seized from me in March 2017 when I was arrested by the Police for blackmail and extortion, following the complaint of Apostle Suleman.”

She said “with my affidavit of disclaimer, my lawyer quickly ran to Ikeja high court where the civil suit filed by Apostle Suleman against me came up for hearing, seeking to withdraw as my counsel.”

“In the said letter, my lawyer’s chambers surprisingly admitted that they never knew any known address of their client (Stephanie Otobo) despite haven defended me so profusely.”

Reacting to the Otobo vs Apostle Suleman’s case, a legal practitioner, Barrister Moses Undogwe said, “The whole thing appears more like a well orchestrated blackmail, calculated to inflict injury on the accused. The most disgusting aspect of it all is the online video clips. It is a case of blackmail.”

A legal luminary who submitted that, in keeping with the ethics of the legal profession, a counsel is not supposed to conduct media trial.

Another legal luminary however submitted that Keyamo should have used an eagle-eyed legal instinct to detect the falsehood in the whole case before taking up the case, adding that, in keeping with the ethics of the legal profession, a counsel is not supposed to conduct media trial.