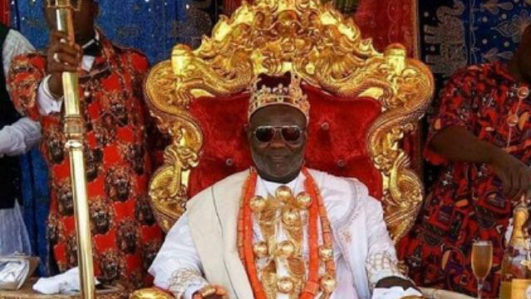 The Amanyanabo of Okochiri in Okirika Local Council of Rivers State, His Royal Majesty, King Ateke Tom, has filed a N1 billion suit against eight chieftains of the All Progressives Congress (APC) in the state over alleged defamation of character.

The suit was sequel to a pro-SARS rally organised in Port Harcourt by APC chieftains in the state in which Ateke’s picture was printed on a banner and allegedly described as a criminal made a king by the state government.

In the suit PHC/345/2018 before a State High Court sitting in Port Harcourt, Ateke also demanded apology from the APC chieftains on national newspapers for denting his character and that the said offensive banner publication be retracted in three national dailies.

The defendants in the suit are Hon. Asita O. Asita, Deputy Governorship candidate of the APC in the 2015 election, Dr. Davies Ikanya, the Chairman of APC in the state, Dumo Lulu Briggs and Sampson Ngerigbara.

Ateke in the suit urged the court to compel the defendants to jointly and or severally pay him N1 billion for libel and defamation of his character.

He also sought a perpetual injunction restraining the defendants whether by themselves or their supporters from making any further defamatory publication concerning the claimant or his office in any form whatsoever as well as an undertaking to that effect.

-Party condemns Wike’s N200 million donation to Benue-
The All Progressive Congress, APC in the state has described the N200 million donated by Governor Nyesom Wike to the Benue State government as a primitive hypocrisy.

Spokesman of the state APC, Chris Fineborne, in a statement yesterday, said the party was shocked at the governor’s display whereas victims of killings and criminality in various parts of Rivers State are licking their wounds and wondering where help will come their way.

Fineborne in a statement yesterday said: “We recall that beyond highly politicised, self-serving and half-hearted visits to Omoku recently, Governor Nyesom Wike has completely ignored killings in various parts of Rivers State, especially in the local council of his PDP national chairman – Andoni. The governor has neither mentioned nor visited Ajakajak and other Andoni villages where several persons have been gruesomely killed up till January 2017.

“Why has the governor not gone to visit victims of killings in Rivers State and donate to their welfare but chose to travel to distant Benue State to display crass duplicity?

“Quite disappointing to the APC is that some prominent Rivers indigenes joined the governor to visit Benue State and even prayed at the graveside of the victims while their own people are being killed in Rivers State without any intervention by Wike and his government.

“We believe that the only purpose for the governor’s ego trip to Benue State is mainly to score cheap and pedestrian political points that have no value whatsoever to Rivers people.”