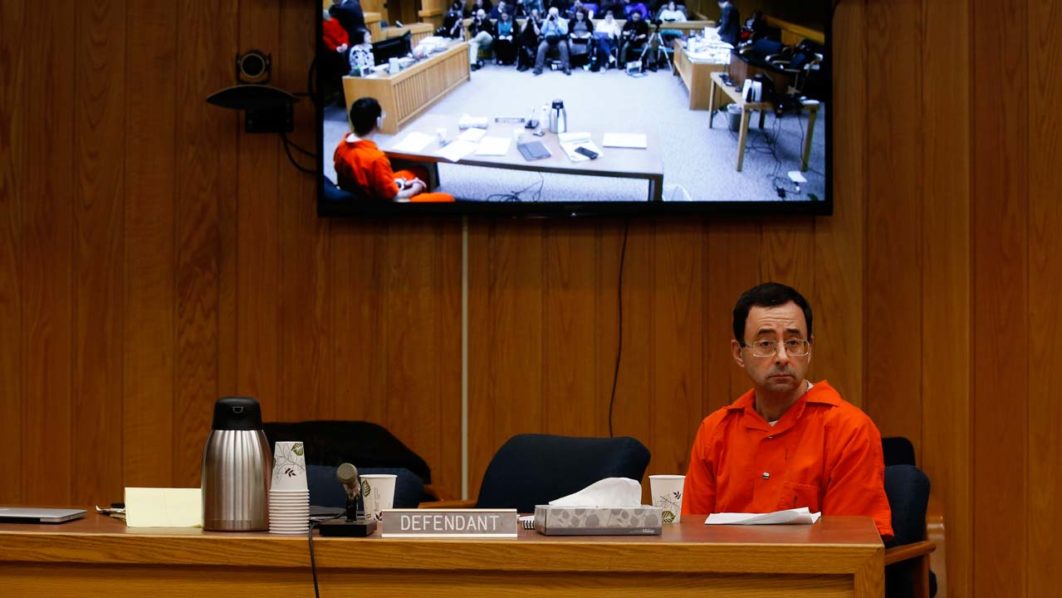 The disruption came on the second day of Nassar’s final sentencing hearing as dozens of women waited for their turn to confront Nassar and tell the court of the abuse they suffered under the guise of medical treatment.

Randall Margraves suddenly hurled himself toward Nassar after two of his daughters had testified in a court in Charlotte, Michigan to their abuse at the doctor’s hands.

Three sheriff’s deputies tackled Margraves, and Nassar was taken out of the courtroom.

“I want that son of a bitch!” Margraves yelled as he was being handcuffed.

“What if this happened to you guys?” he said while being escorted out of the courtroom.

The hearing later resumed with an appeal for calm by Judge Janice Cunningham. Margraves was later released after apologizing to the judge.

“I’m embarrassed. I’m not here to upstage my daughters,” he said. “I lost control. I apologize a hundred times.”

At least 265 young female athletes — including several Olympic medalists — have identified themselves as having been abused by Nassar over a period of two decades. More than 150 have spoken out in court over the past two weeks.

Nassar was sentenced on January 24 to between 40 and 175 years in prison, and was back in court this week for sentencing on yet more sexual abuse charges to which he has pleaded guilty.

Madison and Lauren Margraves had just spoken Friday, when their father asked the judge to “grant me five minutes in a locked room with this demon.”

The comment at first elicited chuckles from the courtroom, but Margraves soon lunged toward Nassar, bringing the proceedings to a halt.

While apologizing during a short hearing later in the day, Margraves explained that he did not know what his daughters were going to say in court and was overcome with emotion after hearing them speak.

“I gotta hear that and I look over here and Larry Nassar is shaking his head ‘no,’ like it didn’t happen,” he said.

Cunningham released him without punishment.

“My heart goes full out to you and your family, because of what you’ve gone through,” she said.

Approximately 30 women were heard from in written and in-person accounts Wednesday, during the first day of Nassar’s final sentencing. Another 35 were expected to speak Friday.

“I can’t believe a grown man would do these horrible things to so many girls and young women,” Lauren Margraves said during her impact statement to the judge.

“I trusted you. My parents trusted you,” she said, addressing Nassar directly. “My two sisters and I have had such a hard time just trying to talk to each other about this.”

Under a plea agreement, Nassar could get a minimum 25 to 40 years in prison. He also has been sentenced to 60 years for child pornography possession.

The Nassar case has triggered a wave of upheaval in the sporting world, with Congress approving a new bipartisan bill to better protect amateur and collegiate athletes from sexual abuse.

Leaders at Michigan State University, where Nassar worked, have resigned along with the entire board at USA Gymnastics, and a number of investigations have been announced into both institutions and the US Olympic Committee.

A local police department in Michigan offered a public apology Thursday to one of the victims, who filed a complaint in 2004 but whose claim was dismissed. The Meridian Township police vowed to make changes to their handling of sexual assault cases.