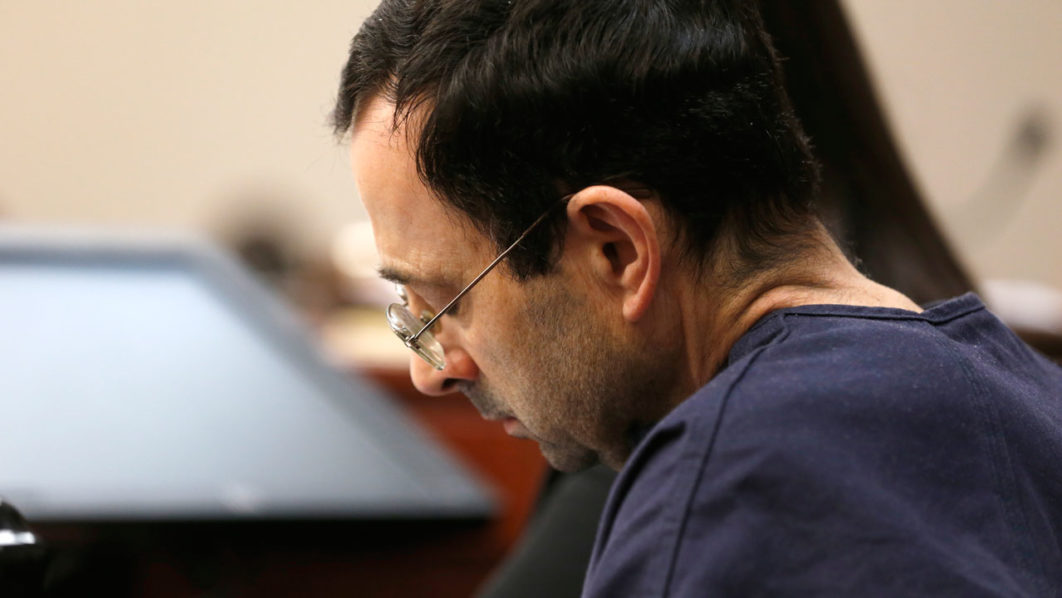 Disgraced former USA Gymnastics doctor Larry Nassar was sentenced to 40 to 175 years in prison on Wednesday for sexually abusing scores of young girls under the guise of medical treatment.

“I’ve just signed your death warrant,” Judge Rosemarie Aquilina said as she handed down the sentence after a week of gut-wrenching testimony by over 150 of Nassar’s victims.

“You do not deserve to walk outside of a prison ever again,” the judge told the 54-year-old Nassar in a tense Lansing, Michigan, courtroom. “Anywhere you walk destruction will occur to those most vulnerable.”

Minutes ahead of the sentencing, Nassar apologized in court to his victims, who included Olympic gold-medal winners Simone Biles, Aly Raisman, Gabby Douglas and McKayla Maroney but also scores of female athletes at Michigan State University, where he worked.

“What I am feeling pales in comparison to the pain, trauma, and emotional destruction that all of you are feeling,” Nassar said, turning at several points to face his victims in court.

“There are no words to describe the depth and breadth of how sorry I am for what has occurred,” he said.

More than 150 women and girls accused Nassar of a pattern of serial abuse dating back two decades.

The final woman to deliver a statement in court was Rachael Denhollander, the first to publicly accuse Nassar of abuse and file a police report against him.

Calling for the maximum sentence, she asked the judge: “How much is a little girl worth? How much is a young woman worth.”

Denhollander said the “brazen sexual assault” upon her occurred when she was 15 years old and was carried out “with my own mother in the room,” unaware of what was going on.

“I assured myself it must be fine because I could trust the adults around me,” Denhollander said.

“Larry found sexual satisfaction in our suffering,” she added.

“I pray you experience the soul-crushing weight of guilt,” she told the slight, bespectacled Nassar, who was dressed in a blue jumpsuit with the words “Ingham County Jail” on the back.

Also speaking to Nassar, Sterling Riethman, 25, said: “This army you have created, we are 150 women strong and counting.

“And let me tell you, this army isn’t going anywhere,” she said, addressing Nassar but also sporting authorities at USA Gymnastics (USAG), the US Olympic Committee (USOC) and Michigan State University.

“We are here to show you,” Riethman said, “there is no white flag to wave when it comes to protecting little girls and their futures.”

Already sentenced to 60 years in prison on federal child pornography charges, Nassar pleaded guilty to 10 counts of criminal sexual conduct. He was sentenced Wednesday on seven of those counts, with a final additional sentence to be handed down late this month.

Riethman thanked Judge Aquilina for opening up the sentencing phase of the trial to anyone who wished to share their experiences — in what turned into a cathartic experience for many survivors.

Parents spoke of the anguish of failing to protect their children from a predator, and women spoke of post-traumatic stress and deep emotional scars.

“You are so sick. I can’t even comprehend how angry I feel when I think of you,” Raisman said.

“Larry, you do realize now that we, this group of women you so heartlessly abused over such a long a period of time, are now a force and you are nothing.”

As victim after victim detailed Nassar’s actions — they also slammed a lack of accountability among sporting institutions, with Raisman in particular demanding an independent probe of USA Gymnastics to find out how Nassar was able to abuse girls with impunity.

Three members of the USAG board of directors resigned on Monday, while John Geddert, a star coach who owns the Twistars gym, was suspended pending an investigation.

USAG also severed ties with the famed Karolyi Ranch — the Texas training facility once considered a breeding ground of champions — where Nassar reportedly had unfettered access to young girls.

Michigan State University is also feeling the heat: the body overseeing US collegiate sports, the NCAA, has opened an investigation after a report claimed MSU president Lou Anna Simon, athletics trainers, assistant coaches and others were long informed of misconduct claims against Nassar.

Nassar remained employed at the university until September 2016, when allegations against him were first made public by a newspaper.

MSU is now facing multiple lawsuits. Simon has resisted claims to resign, but the university has asked the state attorney general’s office to investigate the school’s handling of the case.